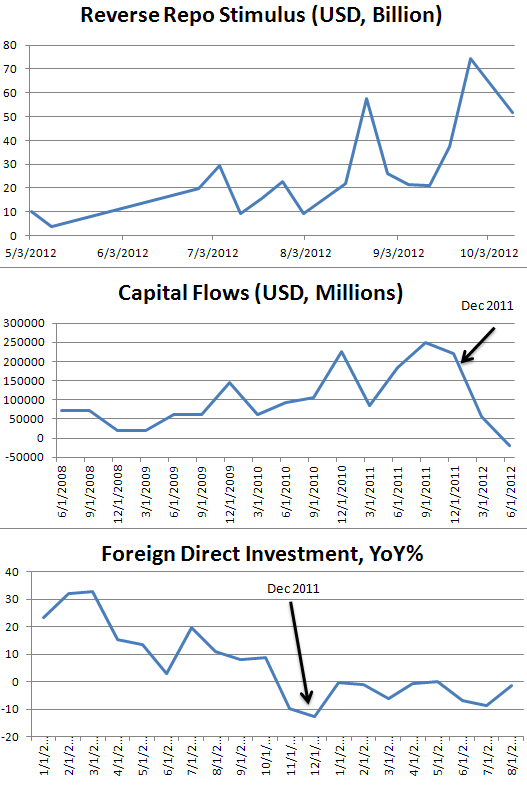 The Australian dollar was little changed versus its major counterparts as prices for both consumer and producer goods in China remain depressed. Home loans in Australia increased by a modest 1.8 percent in August while investment lending receded by 0.8 percent highlighting shaky confidence among entrepreneurs as the European debt crisis and spillover effects from slowing China dampens Aussie export-growth prospects.

Prices in China for consumer related items increased by 1.9 percent whereas prices for industrial products fell by 3.6 percent in September providing further confirmation that the world’s second largest producer continues to grind slower. A closer look into the prevailing economic trends would suggest the recent attempts by the Peoples Bank of China to stimulate via reverse repo operations could be seen as an effort to fill the gap left by foreign capital exiting the troubled region. Investors began running-for-the-doors around December 2011 as highlighted by negative foreign direct investment providing ample explanation behind the reversal in net capital flows. To combat the ‘flight’ the PBOC filled the gap by introducing stimulus in May 2012 and has extended support through to current day. Flagging inflation figures would suggest the current monetary operations have had little effect on stimulating growth.

The Australian currency may not perform well under such pressing conditions as China is the largest consumer of Aussie exports. Moreover, according to Credit Suisse data, markets appear to be pricing in a 84 percent probability of a 25 basis point reduction to rates by the Reserve Bank of Australia during the next meeting on November 6.