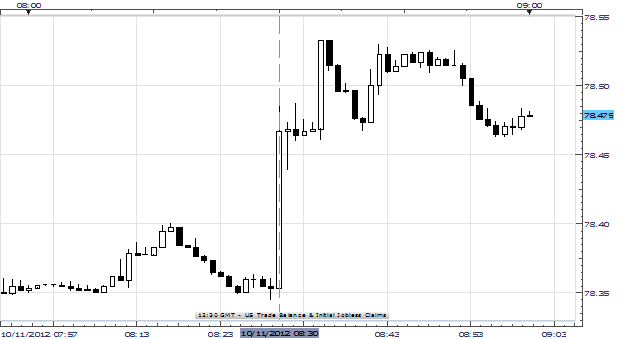 The U.S. Department of Commerce issued a report this morning showing that the U.S. trade deficit widened in August as the slowdown in global economies restrained demand for American exports. The trade gap grew by 4.1 percent to $44.2 billion in August from $42.5 billion the previous month. Economists surveyed by Bloomberg News had expected the trade deficit to widen to $44.0 billion.

Slower global growth, particularly in China and Europe, has been weighing on demand on American goods. At the same time, increasing energy costs is likely to continue to elevate import costs and further widen the trade deficit.

Separately, the Labor Department reported that the number of Americans filing first-time applications for unemployment benefits unexpectedly declined last week to its lowest level since February 2008, signaling a huge improvement in the labor market. Initial jobless claims fell by 30,000 to a seasonally adjusted 339,000 in the week ended October 6, compared to a revised figure of 369,000 the week before that was slightly higher than the initial estimate of 367,000. The median forecast of economists surveyed by Bloomberg had projected a rise in claims to 370,000.

Last week, the U.S. Bureau of Labor Statistics reported that the unemployment rate plunged to 7.8 percent in September from 8.1 percent. Last week’s drop in jobless claims provides evidence of an improving labor market, which has been struggling to gain traction. On the other hand, Fed noted little change in employment conditions in its latest Beige Book report, which was released yesterday. The Fed said “stagnant demand and uncertainty related to the upcoming presidential election, U.S. fiscal policy, and European debt issues” were restraining hiring.

Immediately after the release of the two reports, the U.S. dollar soared against the Japanese yen, its safe-haven counterpart, reaching a high of 78.53 yen. At the time this report was written, the USDJPY pair continued to trade higher at 78.48 yen.