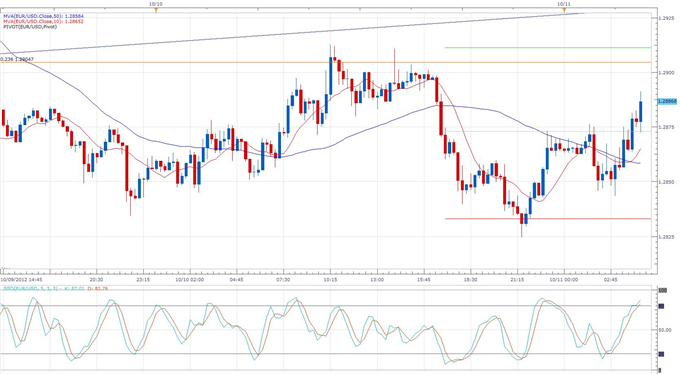 The European Central Bank said growth in the Euro-area is expected to remain weak, as tensions in certain markets keeps confidence and sentiment down, according to the monthly bulletin from their October meeting. The ECB continued to say that economic indicators confirm the continuation of a weak economy in the third quarter.

The ECB quoted rising energy prices,increases in indirect taxes, and the resulting higher inflation as the reason that the central bank kept rates unchanged in their October meeting. The ECB predicted that inflation will remain above 2% for the rest of 2012, but will drop below 2% in 2013.

The ECB said the decision regarding the OMT has helped relieve certain tensions, but the governments must continue to implement necessary steps. The bulletin stressed the importance of the conditionality of OMT purchases, thereby reflecting Draghi’s statements at the European parliament.

Finally, the ECB supported efforts to implement a single supervisory mechanism for Euro-area banks. The ECB has already begun preparatory work so as to be ready to implement the joint banking supervision.

The Euro rose slightly following the release of the bulleting, possibly on optimism over the implementation of the OMT program. Euro investors may be hoping to see Spain agree to the ECB’s conditions for bond purchases, which could be a step in the direction of a recovery from the debt crisis.

EURUSD is currently trading closer to the key 1.2900 line, where resistance could be found by the 23.6% retracement of the rally that began at the end of July. Support could be provided by the month-long low at 1.2803.