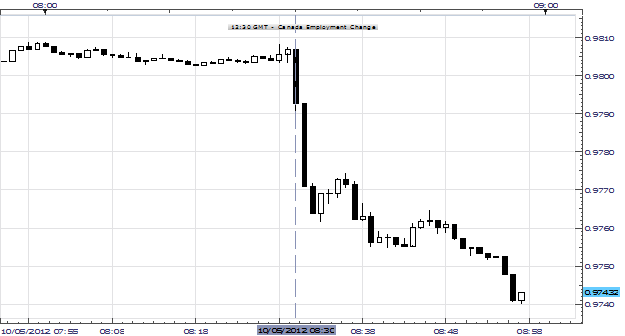 Companies in Canada added significantly more workers than forecast in September, led by broad-based gains in full-time positions. Ottawa-based Statistics Canada released a report today that showed that employers added 52,100 new jobs in September, the biggest gain in five months. September’s reading beat the median forecast of 10,000 according to a Bloomberg News survey, and was led by a rise of 44,100 full-time positions.

Meanwhile, Canada’s jobless rate unexpectedly rose to a seven-month high in September, climbing to 7.4 percent from 7.3 percent in July and August. The rise in unemployment rate was due to a rise in the participation, which rose from 66.8 percent from 66.6 percent, as more Canadians gained confidence in the labor market and re-entered the workforce.

Bank of Canada Senior Deputy Governor Tiff Macklem acknowledged yesterday that some slack remains in the labor market. However, he reiterated that an interest rate hike may become appropriate as the economy moves towards full output.

The Canadian dollar rallied against the greenback in the initial minutes following the release of the stronger-than-expected employment data. A U.S. employment report was released at the same time, which reported a gain in nonfarm payroll employment that was largely in line in consensus expectations. At the time this report was written, the loonie continued to trade higher with the USDCAD pair trading at C$0.9743.