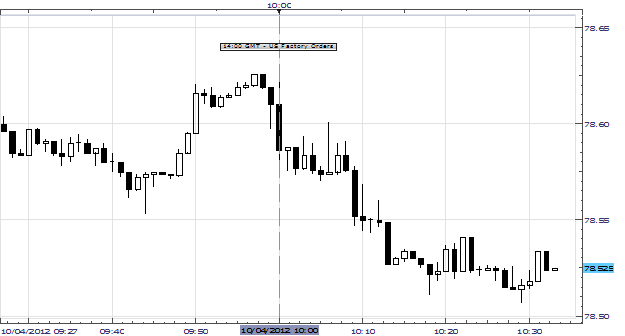 THE TAKEAWAY: U.S. factory orders plummets in August by most since January 2009 > Demand likely to remain weak amid global slowdown and weak business spending > USDJPY bearish

New orders to U.S. factories plunged in August by the most since January 2009, as a sharp slump in transportation weighed on manufacturing activity. According to the U.S. Department of Commerce, orders for factory goods declined 5.2 percent in August, following a revised gain of 2.6 percent the previous month that was lower than the 2.8 percent growth initially reported. The consensus forecast of 66 economists surveyed by Bloomberg News had projected a 5.9 percent decline in bookings for manufactured goods. Excluding transportation, factory orders rose 0.7 percent, suggesting modest expansion in broader-based manufacturing activity.

Orders for durable goods tumbled 13.2 percent after posting three consecutive monthly increases, while non-durables, which include goods such as petroleum and chemicals, climbed 2.2 percent. Transportation equipment had the largest decrease, plummeting 34.9 percent.

The cooling in manufacturing reflects a slowdown in business investment and exports, as concerns about the impending fiscal U.S. fiscal policy changes of higher taxes and government spending cuts, and ongoing worries about the European debt crisis and slowing global growth provide a weak environment for business spending.

In the initial minutes after release of the factory order data, the greenback tumbled against the Japanese yen. At the time this report was written, the USDJPY pair continued to trade lower at 78.52 yen.