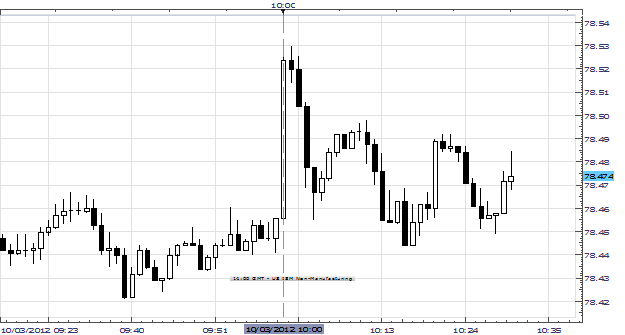 US Dollar Rises After ISM Non-Manufacturing Grows In September

Services industries in the U.S. expanded in September at its fastest pace in six months, boosted by a pickup new orders and prices paid by businesses for materials and services. The Institute for Supply Management (ISM) reported today that its index of non-manufacturing businesses, which accounts for about 90 percent of the U.S. economy, rose to 55.1 in September from 53.7 a month earlier. A reading above 50 indicates expansion. The median forecast of 77 economists surveyed by Bloomberg News had projected a dip in the index to 53.4.

The Business Activity index, which is considered the most significant of 10 sub-components reported, climbed 4.3 points in September to 59.9, the highest such reading since February. New Orders jumped to 57.7 from 53.7 while Prices Paid, a gauge of inflation, soared to 68.1 from 64.3. On the other hand, the Employment index, which measures sentiment towards hiring within the services sector, slumped to 51.1 from 53.8.

Anthony Nieves, chair of ISM’s Non-Manufacturing Business Survey Committee, noted that the leading indexes signal continued growth and that “this is a very strong report”, though sustained gains would be needed to confirm further improvement. In regards to hiring, Nieves commented that although employment in the services sector is lagging business confidence, growing confidence should lead to more jobs in coming months.

Following the better-than-expected data, the U.S. dollar initially jumped against the Japanese yen, its safe haven counterpart, climbing to as high as 78.53 yen from 78.46 ahead of the data. At the time this report was written, the USDJPY pair had fallen back and was trading at 78.47 yen, close to its prerelease level.