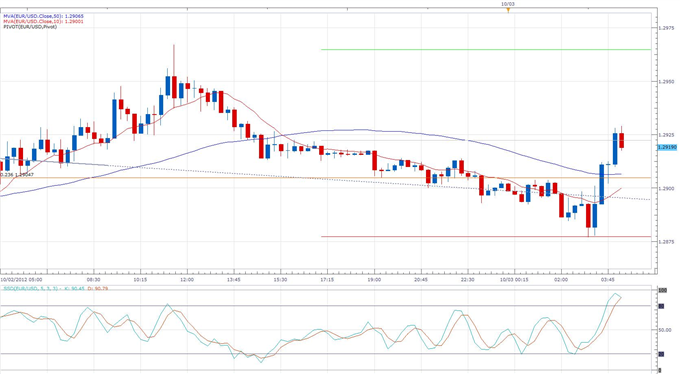 Euro Rallies On a Positive Revision of EZ Output

In Germany, the PMI for services was revised lower, dropping from 50.6 to 49.7 and indicating that business activity in services did not expand in September. A PMI below 50.0 indicates contraction in sector activity.

According to Markit’s index, Euro-zone job losses increased in September because of a drop in business activity and new orders. The average composite output index for Q3 in the Euro-zone was 46.3, which was slightly lower than the 46.4 average Q2 index result and was the worst quarterly average since Q2 2009.

Ireland was the only country to report an increase in overall economic activity in September, according to Markit, while Italy saw a steep drop in business activity. The decline in the French output index was the sharpest in its history.

Based on the results of the PMI’s for the third quarter, it seems like a negative Euro-zone GDP could continue for a second quarter and signal a recession. Chief Markit Economist Chris Williamson said, “Although there were some signs of stabilization in Germany, any hopes for optimism that the current downturn has bottomed out are tempered by news of steepening rates of contraction in France and Spain, and an ongoing severe downturn in Italy.”

Despite the pessimistic PMI, the revision was an improvement from the previous estimate and therefore erased earlier session losses in the Euro. EURUSD rose back above the key 1.2900 key level during the releases of the PMI’s. Resistance could come in by the key 1.3000 level.