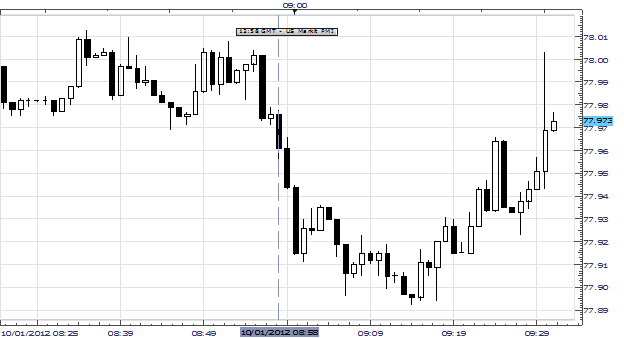 U.S. manufacturing activity expanded in September at its slowest pace in three years, suggesting that the sector could be heading into a period of contraction. A report released today by the London-based Markit group showed that its key business activity index fell to 51.1 in September from 51.5 the previous month. A reading above 50 in the purchasing managers’ measure indicates expansion. Economists surveyed by Bloomberg News had expected the final reading for September to remain unchanged from its preliminary reading of 51.5.

Manufacturing output declined from 51.9 to a three-year low of 50.6, while employment fell to 51.9, the lowest reading in almost two years.

Once a pillar of strength for the U.S. economic recovery, the manufacturing sector has been struggling in recent months. Softer global conditions, particularly in Europe and China, are continuing to restrain demand for American goods and weaken U.S. business conditions. Furthermore, businesses are holding back on concerns over the impending fiscal cliff and government spending cuts. Meanwhile, consumer spending, which accounts for around 70 percent of the economy, remains subdued amid ongoing weakness in the labor market and stagnant wage growth.

The Institute for Supply Management (ISM) will publish its own manufacturing survey report later this morning. Economists are expecting the ISM survey to show a fourth month of contraction in manufacturing activity in September.

The U.S. dollar fell against the Japanese yen in the minutes following the release of the Markit PMI report, bottoming out at 77.89 yen. However, at the time this report was written, the USDJPY pair had retraced its decline to trade at 77.97 yen.