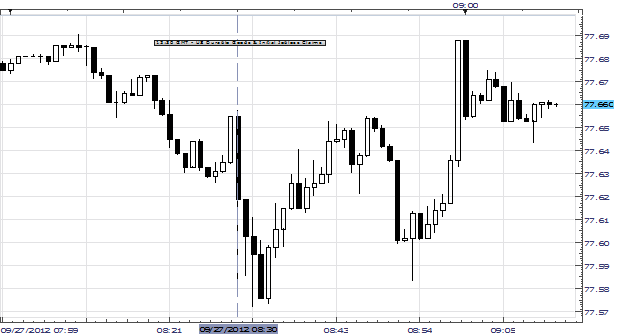 THE TAKEAWAY: U.S. Durable Goods Orders fell in August by most in over 3 years; Initial Jobless Claims better than expected > Manufacturing slump amid concerns of fiscal cliff > USDJPY mixed

Demand for U.S. durable goods slumped in August by the most since January 2009, as slowdowns in business investment and exports continue to restrain recovery of the U.S. economy. According to the U.S. Census Bureau, new orders for manufactured durable goods declined by 13.2 percent in August, following a downwardly revised 3.3 percent gain the previous month. Orders excluding transportation fell 1.6 percent. The latest figures were a huge disappointment, falling well short of consensus forecasts of economists surveyed by Bloomberg News, which had called for a 5.0 percent decline in durable goods orders and a 0.2 percent rise excluding transportation.

Manufacturing activity in the U.S. has slowed down, as businesses hold back amid concerns over the impending fiscal cliff and government spending cuts. Furthermore, American factories face persistent headwinds as a slowdown in global economies, particularly in Europe and China, continue to dampen demand for U.S. exports. The slump in manufacturing and durable goods orders could prompt the Federal Reserve to take action sooner and move closer towards launching another round of bond-buying to stimulate the economy.

At the same time this morning, the Labor Department issued a report that showed that the number of Americans filing first-time claims for unemployment insurance payments declined last week to its lowest since July. Applications for unemployment benefits fell to 359,000 last week, following an upwardly revised figure of 385,000 new claims the week before. Economists surveyed by Bloomberg News had projected 375,000 new jobless claims.

Despite last week’s decline in initial jobless claims, unemployment is likely to remain elevated as a slowdown in global economies and looming U.S. fiscal policy changes weigh on the labor market and keep employers reluctant to hire more workers.

Immediately after the data release, the U.S. dollar tumbled as much as 9 pips against the Japanese yen before rebounding back towards pre-data levels. Trading of the USDJPY pair remained mixed, and at the time this report was written, the U.S. dollar had moved higher to 77.67 yen.