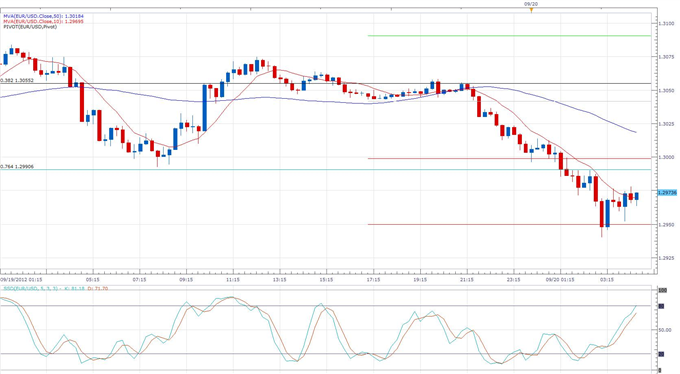 Euro-Zone GDP Will Fall 0.6% in Q3 According to Markit's PMI

The Euro-zone composite output dropped to a 39-month low according to a flash estimate by Markit. The output index disappointed expectations at 45.9 in September, the 12th month of declining output out of the past 13 months. The Purchasing Managers’ Index for services activity fell to 46.0, a new 38-month low. The PMI for manufacturing beat expectations at 46.0 and set a new six-month high. An index below 50.0 indicates contraction in that sector.

A fall in production and new orders was seen across the Euro-zone, but Germany saw the rate at which output declined substantially slow. Employment fell in the Euro-zone for the ninth consecutive month and at the fastest rate since January 2010.

Markit Chief Economist Chris Williamson said the PMI’s suggest that the Euro-zone GDP will fall 0.6% in the third quarter, which would be the worst quarter in 3-years.

However, the Euro did not significantly react to the worse than expected Euro-zone output. Major risk correlated currencies are all down against safe-have correlated assets this session, including the Euro against the US Dollar, following lower sentiments about a Euro recovery and weak data from the Asia session. EURUSD fell below the key 1.3000 line which has provided support for the past week, and could now provide resistance.