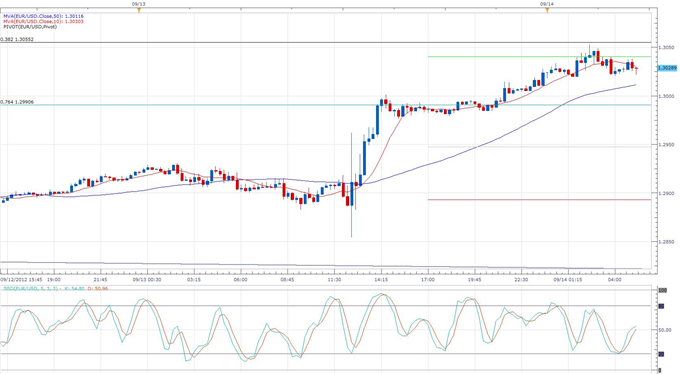 Euro-zone annual inflation rose back up to 2.6% in August, following 3 straight month of a 2.4% inflation rate. The consumer price index for August was 0.4% higher, the first rise in prices in 3 months. Both the monthly and annual consumer price results were as expected.

Cyprus’s annual inflation was the highest among Euro-zone nations in August, up 4.5%, according to Eurostat. Greece saw the lowest inflation rate, up 1.2% annually. Transport prices rose 4.8% from August 2011, while housing prices rose 4.1%.

Also in the Euro-zone, employment was unchanged in the second quarter, while employment fell 0.6% when compared to 2Q of 2011.

The inflation rate influences the European Central Bank’s monthly rate decision, as a higher inflation could indicate a rate cut is less likely. Despite economic contraction in 2Q, the ECB left the interest rate at 0.75% in September’s meeting; a rate cut in the next meeting would be Euro-negative but overall risk-positive.

However, the Euro did not rise on the higher inflation rate as could have been expected; rather, EURUSD fell back towards 1.3020. The pair continued to gain in today’s trading and rose above 1.3000 following yesterday’s QE3 announcement. The next resistance could be found at 1.3055, by the 38.2% retracement of EURUSD’s move from the all time low to the all time high.