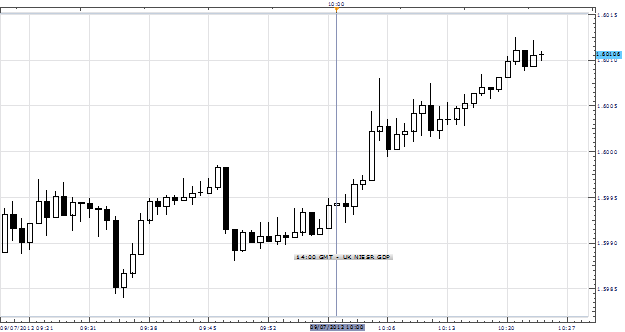 The British economy expanded in August for a second month, as it continued to emerge from recession though recovery continues to face global and domestic headwinds. According to the National Institute of Economic and Social Research (NIESR), gross domestic product (GDP) rose 0.2 percent in the quarter to August, the second three-month period of expansion after the Institute upwardly revised its GDP estimate for July to 0.3 percent from minus 0.2 percent previously reported. This follows seven straight periods of contraction, marking Britain’s emergence from recession in July.

The NIESR indicated that economic growth is likely to remain weak as “significant downside risks” to the outlook and uncertainties persist amid the ongoing euro-area debt turmoil. “While we expect the economy to continue to expand, it will take more robust rates of growth than we have recently seen to close the U.K.’s large negative output gap,” noted NIESR. While the recession appears to be over, the period of depression, defined as a period when output is depressed below its previous peak, is likely to continue for some time, with output unlikely to exceed its peak in early 2008 until 2014.

Yesterday, the Bank of England announced its decision to keep the official bank rate at 0.5 percent and the size of its asset purchase program unchanged at £325 billion. With GDP growth expected to remain weak in the near term, the possibility of further monetary stimulus in the coming months remains on the table.

The pound rallied against the greenback in the minutes following data release, amid expectations that the British economy will continue to expand despite ongoing downside risks. At the time of this report, the GBPUSD pair was trading at $1.6015 to the pound.