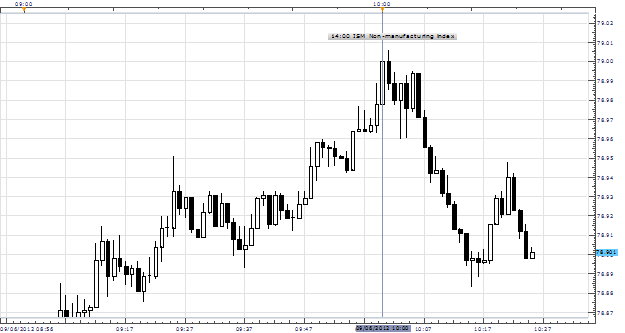 USD Pares Gains After ISM Non-Manufacturing Picks Up in August

THE TAKEAWAY: [U.S. services industries expectedly expands at a faster pace in August] > [Hiring picks up, though price increase is a concern] > [USDJPY bearish]

Services industries in the U.S. unexpectedly expanded in August at a slightly faster pace than a month earlier, boosted by a pickup in hiring and prices paid by businesses for materials and services. A report released by the Institute for Supply Management (ISM) showed that its index of non-manufacturing businesses, which accounts for about 90 percent of the U.S. economy, rose to 53.7 in August from 52.6 the previous month. The median forecast of 76 economists surveyed by Bloomberg News had projected a decline to 53.5. A reading above 50 indicates expansion.

The Business Activity index, which is considered the most important of 10 sub-indices reported, fell 1.6 points to 53.7 in August. New orders also declined, falling to 53.7 from 54.3. On the other hand, the prices paid index, an indicator of future inflation, surged to 64.3 from 54.9 while employment jumped to 53.8 from 49.3. The improvement in hiring falls in line with a report released earlier today by ADP Employer Services that showed that gains in private employment rose to a five month high in August.

Stronger retail sales and a pickup in the housing market have helped support growth in the services industry. The pickup in hiring is another encouraging sign, as we could see wage growth that would spur further consumer spending. Anthony Nieves, chair of ISM’s Non-Manufacturing Business Survey Committee, commented that the increase in hiring reflects steady growth in services, though companies will need to see faster growth before expanding further. Nieves further noted that higher prices “are a concern”, and could hold back growth in hiring and business spending.

The U.S. dollar fell against the Japanese yen in the minutes following data release, paring earlier gains made after the ADP employment report was issued earlier this morning. At the time this report was written, the USDJPY pair was trading lower than pre-data levels at 78.91 yen.