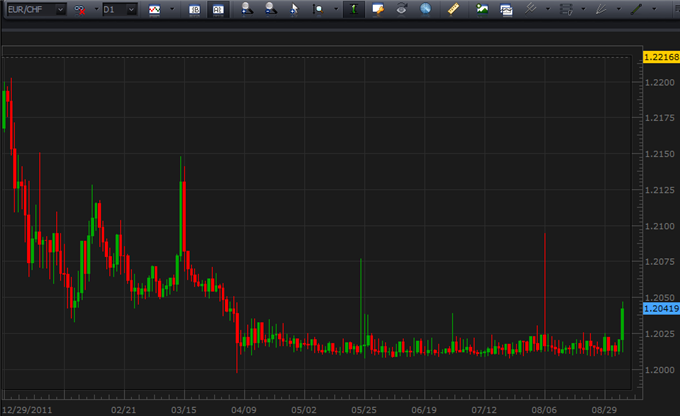 Has EURCHF Left 1.2000 for Good or Will it Quickly Reverse Again?

Traders have been waiting for a resolution to the EURCHF’s tedious 10-pip chop for months, and today’s climb is drawing in traders with very different agendas. The argument is binarily divided with one segment expecting the SNB’s imposed 1.2000-floor for the pair to fail and trigger a sharp decline, while the opposition are awaiting another round of intervention from the central bank to drive the franc lower (EURCHF higher). What we are seeing, however, looks more like the third possible outcome, the one that disappoints traders looking for action but is ideal for central bankers: a slow and intrinsic rebound.

The different, speculative views on the EURCHF make for a heavily-fundamental argument for an active trade setup. In this particular advance (only 15 pips above the norm), both those expecting the SNB’s efforts to fail against the endless tides of the Euro-area financial crisis as well as the faction that believes the SNB has to act to permanently lift the pair may find common ground. For the bearish skeptics of exchange rate manipulation, this move will end like all other advances since the initial floor was introduced, and is therefore a reason to add to shorts. Alternatively, the bulls awaiting a dramatic rally on further intervention (I count myself amongst this rank), see this move as a short-lived bounce like a few other examples we’ve seen over the past six months.

The ‘less favored’ scenario (for speculators hoping for a quick return) is that this could be a stable but consistent advance off of the unnatural floor. When we look at the intraday charts of EURCHF (the four-hour chart can be seen below), we can see that this particular move is unlike the few, sharp rallies and reversals of the past four months. There is a modest level of consistency rather than immediate retracement. 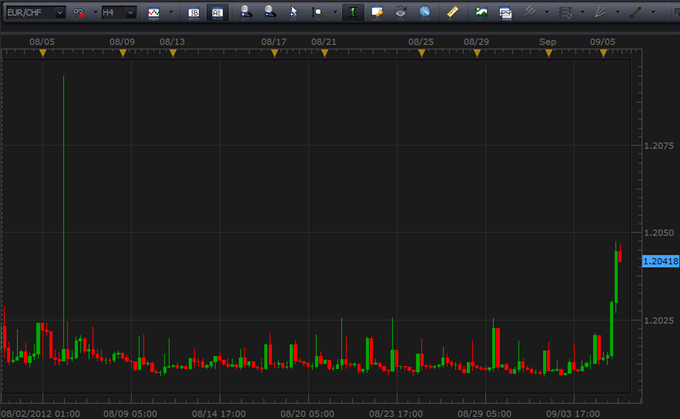 Where we go from here – and which trading position best fits – depends on the fundamentals driving this move. In the previous, short-lived advances we have seen since April, jumps have been based on unconfirmed and positioning based conditions (large speculative shorts covering their positions, foreign funds withdrawn as anonymity in the Swiss banking system fades, etc). Given the liquidity of the market and the persistence of Euro-area safe haven flows (fleeing the Euro Zone and seeking harbor in Switzerland), such moves are immediately corrected. Yet, with this advance, there is consistency that seems to follow another ‘hope’ for the European crisis fight: an ECB bond purchasing program.

The European Central Bank has quickly returned to the forefront of the Euro-area financial crisis rescue effort, yet their efforts have proven just as disappointing as the Troika’s. In the lead up to the last policy decision, President Draghi set off hope and bullish speculation by suggesting the group would do anything necessary to sustain the currency and Union. When the policy outcome was presented, however, nothing was changed. Whether the EURCHF continues its current advance likely depends on what the ECB offers now.

Heading into the September announcement (Thursday, 11:45 GMT), speculation has hit a frenzied pace. Once again, the market is expecting guidance with a heavy expectation that details will be presented for an open-ended bond purchasing program that will help pull down high, government bond yields. If details are not offered or (as been the case in the past) the market deems it insufficient, the natural flow of capital into the region’s safe haven (Switzerland) will quickly drag the EURCHF back down to 1.2000 and redirect the pressure back on the SNB’s shoulders.

Follow the Real Time News Feed and the Live ECB Coverage to see the immediate outcome to the ECB rate decision. In the lead up, DailyFX will present multiple views on the outcome of event.