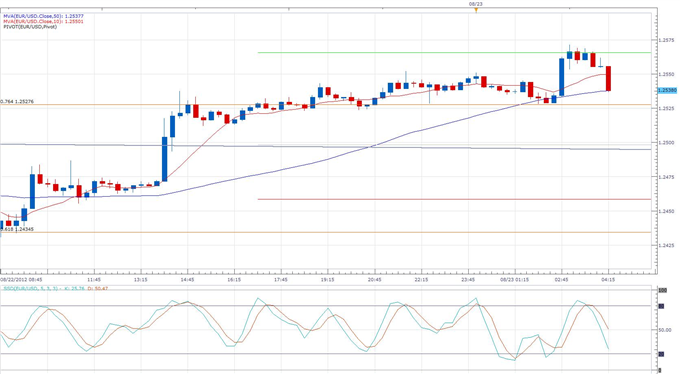 Euro-zone composite output fell for the seventh straight month in August according to the initial estimate of Markit’s Purchasing Managers’ Index. The composite PMI was reported at 46.6, which was still better than expectations for 46.5. The manufacturing activity index rose to 45.3, which was better than the expected 44.2 survey result. The PMI for services dropped to 47.5, lower than the expected 47.7 index. A PMI below 50.0 indicates decline.

German PMI for services unexpectedly declined for the first time in 3 years, while both French PMI’s for services and manufacturing were better than expected in August.

New order declines were heavily responsible for the lower activity. New export orders declined for the fourteenth month in August, according to Markit’s release. In the labor market, employment levels declined for the eighth straight month.

However, confidence levels modestly improved in August, especially in France.

Markit Senior Economist Rob Dobson said he thus far expects continued Euro-zone economic contraction in Q3, “taken together, the July and August readings would historically be consistent with GDP falling by around 0.5%-0.6% quarter-on-quarter, so it would take a substantial bounce in September to change this outlook.”

There have been recent reports of the ECB considering a plan to cap Spanish and Italian yields, as a measure to help fix the Euro debt crisis. German Chancellor Angela Merkel has voiced support of such an action, and tomorrow she will meet with Greek Prime Minister Antonis Samaras to discuss Greece’s bailout needs and a possible extension of the country’s budget targets.

The better than expected composite PMI did not have a significant effect on the Euro. EURUSD fell past 1.2550 after the index release, likely a correction of earlier rallies. The pair rallied yesterday above 1.2500 and a 3-month descending trend line, thereby setting a new monthly high, following the release of the FOMC minutes. The minutes indicated that the committee members are considering another round of quantitative easing. A 2-year descending trend line could provide resistance around 1.2660.