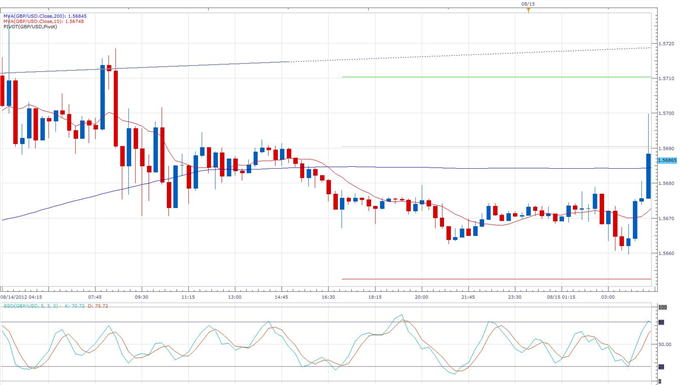 A unanimous BoE vote and better than expected employment numbers sent the British Pound higher in today’s trading. According to the minutes from their last meeting, the votes to keep the Bank of England’s asset purchase target and interest rate unchanged were uncontested. Meanwhile, the number of jobless claims in July dropped by 5.9 thousand instead of rising an expected 6 thousand.

The BoE minutes looked forward to a sharp rise in the UK GDP in the third quarter, when much of the 2Q decline will be recovered. The central bank said that a cooling inflation and the Funding for Lending Scheme will help the economy. The bank expects annual inflation to fall closer to 2% in the coming months; this follows the reported July 2.6% inflation rate.

However, the BoE also warned that the pace of recovery could be disappointing and some Monetary Policy Committee members saw good case for further QE expansion, despite not voting for such. The minutes also warned that a continuing appreciation of the British Pound against the Euro could influence the outlook for growth and inflation in the UK.

In regard to the new Funding for Lending Scheme, the BoE said it will take a while before they start to see the impact of the scheme, and will wait to see those effects before deciding on further measures like expanded QE. Meanwhile, the asset purchase target remains at 375 billion Pounds.

As the BoE minutes were being released, the jobless claims rate also surprised markets by dropping in July. The unemployment claimant rate remained at 4.9% in July, and June’s jobless claims change was revised lower to only one thousand, according to the Office for National Statistics. The International Labour Organization determined the UK unemployment rate for the three month period ending in June at 8.0%, also beating expectations for the rate to remain at 8.1%.

The Olympics were the likely source of the unexpected rise in jobs; the jobs creation was surprising when considered in the context of three straight quarters of GDP decline.

The British pound erased earlier declines against the US Dollar following the releases, stopping just shy of 1.5700. GBPUSD has been trading in a 10-day upward trend, and resistance could be provided around the upward channel, currently at 1.5720.