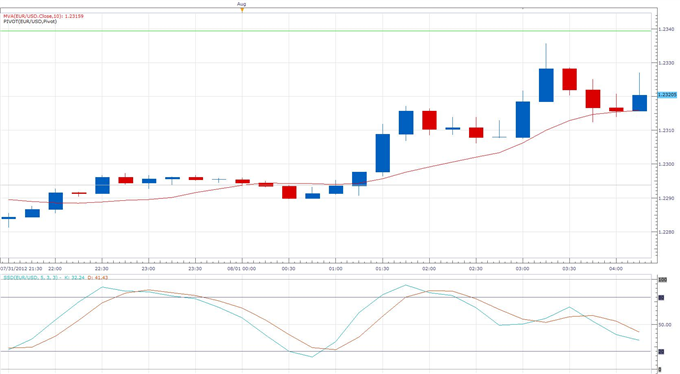 Euro-zone manufacturing activity declined even more than initially estimated according to the final release of July’s Purchasing Managers’ Index. The PMI for July was confirmed at 44.0, down from an initial estimate of 44.0, and further lowering the lowest manufacturing index in 37-months. Any PMI below 50.0 indicates a contraction in activity.

The decline in July’s PMI was a sum of faster contraction in output, new orders and employment in the manufacturing industry. Manufacturing activity has been contracting for the past 12 months according to Markit. Only Ireland managed to show an improved PMI for July, rising to a 15-month high at 53.9.

Germany’s PMI for manufacturing was the worst since April 2009, released at 43.0, lower than an initial estimate of 43.3. Reduced production volumes have been recorded in Germany in each of the past four months, driven by a decline in the investment goods sector, according to Markit. July’s survey showed thirteen straight months of contraction in incoming new business for German factories.

Markit Chief Economist Chris Williamson said, ‘manufacturing looks to be on course to act as a major drag on economic growth in the third quarter, as the Euro-zone faces a deepening slide back into recession.’

The decline in manufacturing activity is a result of the European economy struggling with its debt crisis. Euro investors are slightly more optimistic since ECB President Draghi’s comments last week, but they should be looking towards tomorrow’s meeting for action to back up Draghi’s words, like the backing of a banking license for the ESM.

There was no significant reaction in Euro trading to the worse than estimated PMI’s, as traders seem focused on the possible outcomes of the FOMC meeting set for this afternoon and the ECB meeting tomorrow. EURUSD is currently trading around 1.2300, and support could come in around the 1.2300 psychological line, and resistance could set in at 1.2333, by an upward trend-line spanning nearly a decade.