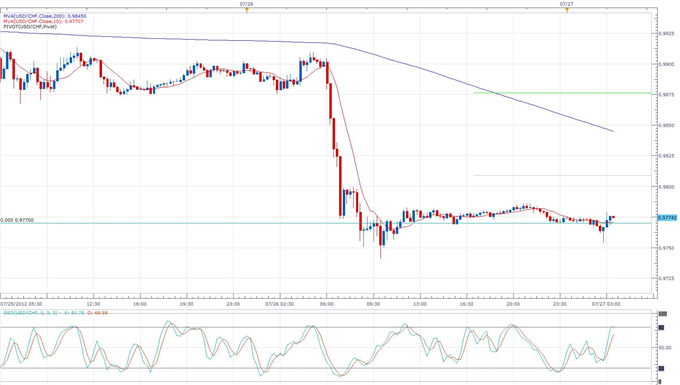 Swiss Economy Set to Grow Even Faster According to KOF Indicator

The Swiss economy will grow at an even faster momentum according to the KOF leading indicator, which rose for sixth straight month in July, reaching the highest level since August 2011. The leading indicator was reported at 1.43, beating analysts’ expectations for 1.20 and higher than June’s revised 1.15 leading indicator.

The indicator measured improved construction activity, while the banking sector continued sideways, as the rest of the industries’ activities that are included in GDP measures grew in June. The KOF Swiss Economic Institute’s gauge is supposed to predict GDP activity 6 months into the future.

The Swiss economy has performed well in 2012, avoiding pressures from the Euro debt crisis, and has therefore become an ideal safe haven for investors. That is why Swiss 5-year bond yields turned negative at the end of May, and the 10-year benchmark bond yield continues to decline in the same direction.

The Swiss Franc did not gain following the release of the indicator, but actually traded lower as news of a record high 24.6% Spanish unemployment was also released. Yesterday, USDCHF corrected lower from 18-month highs on news of President Mario Draghi’s comments that the European Central Bank will do whatever necessary to preserve the Euro. A previous resistance line at .97700 could provide support.