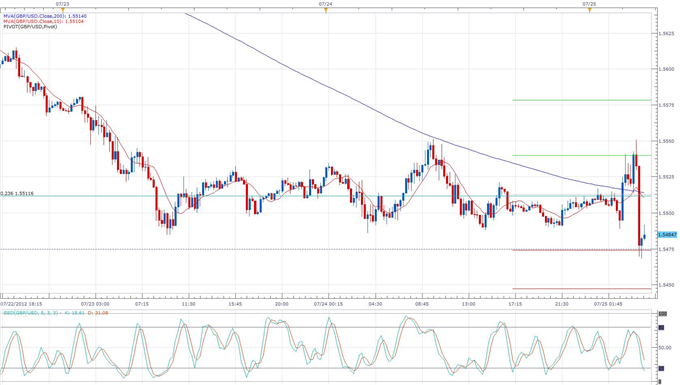 Sterling Plummets as UK Recession is Worse than Expected

United Kingdom gross domestic product for 2Q falls for the third straight quarter and furthers the economy’s technical recession. The GDP was 0.7% lower than the previous quarter, below analysts’ estimate for a 0.2% drop and last quarter’s 0.3% contraction. The second quarter’s GDP was 0.8% lower than 2Q 2011, according to the Office for National Statistics.

The loss in GDP was attributed to the quarter’s rainy weather and the extra days off for the Queen’s Jubilee. Manufacturing was down 3.1% during the second quarter, construction fell 9.7%, and services industries were up 0.7%.

The UK Chancellor of the Exchequer George Osborne said the GDP numbers confirm the fact that the British economy has deep rooted economic problems; he attributed the problems to world economic factors.

A lower GDP raises the chances for further Bank of England action, which would be currency negative. The BoE increased their asset purchase program in their July meeting; they also have created a lending program to spur additional borrowing. According to the minutes from the BoE meeting, they will also cut the interest rate if they asses that the lending measures were insufficient.

GBPUSD dropped 80 points on the lower than expected GDP, falling from the 1.5500 resistance. Support continues at 1.5475, a support line that has held up since the beginning of the June. Surprisingly, the weak GDP only affected Sterling trading, as Euro and Aussie both continued to trade steady against the US Dollar.