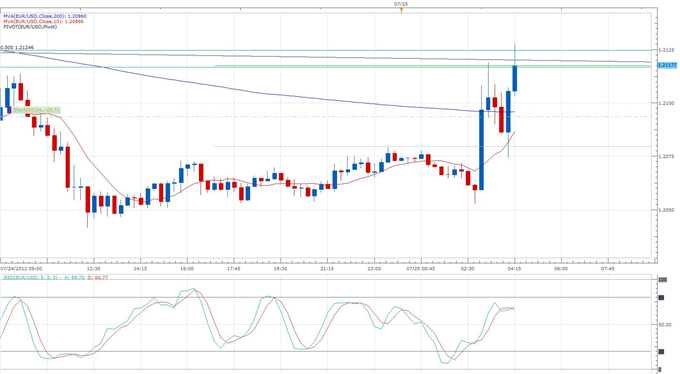 German business climate worsened in July for a third straight month according to an IFO institute survey. The business survey still reported a positive business climate at 103.3, although it was worse than analysts’ expectations for a 104.5 survey result and lower than June’s survey, which was corrected lower to 105.2. Although the business climate is positive, as it is above 100.0, it still is at the lowest point in over two years.

The current assessment for July was surveyed at 111.6, but the expectations for the future were notably more negative at 95.6. The business climate for the construction was the lowest of the sectors at -6.7, while the climate in retail trade was 5.1.

The German economy continues to show signs of the pressures created by the surrounding Euro-zone crisis. Just yesterday, the PMI’s for German manufacturing and services reached unexpected all time lows. Meanwhile, worries over Spanish and Greek debt have only worsened as bailout possibilities to both countries were delayed.

However, earlier this morning the market caught a bit of positive news, as European Central Bank member Nowotny said the ESM should be given a banking license, which would give the permanent bailout fund access to ECB funding.

EURUSD jumped 50 points following Nowotny’s comments, climbing above the multiple day support/resistance 1.2100 line. The Euro continues to trade in this area, and was not affected by the worse than expected IFO survey.