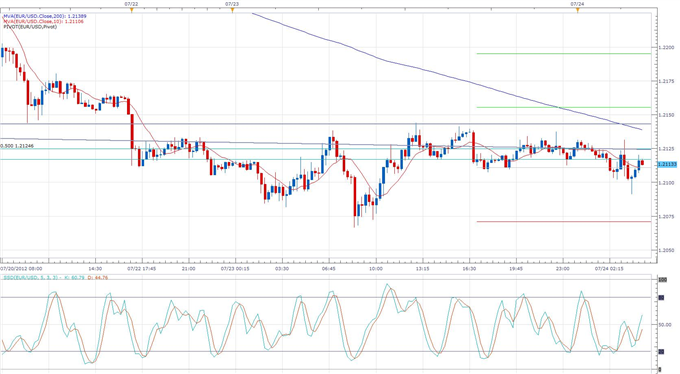 THE TAKEAWAY: Euro-zone PMI for manufacturing drops to 44.1, PMI for services rises to 47.6 -> 11 straight months of declining Euro-zone output -> Euro continues to trade above 1.2100

Euro-zone manufacturing activity fell during July at the sharpest rate in 3 years according to an initial Purchasing Managers’ Index. The PMI for manufacturing fell to 44.1 in July, lower than the expected 45.2 survey result; PMI for services was up to 47.6, higher than an expected unchanged 47.1 survey result. The composite index for both industries was reported by Markit at 46.4, unchanged from June and in line with expectations. This is the eleventh straight month of a drop in Euro-zone industry activity, as any survey result below 50.0 indicates a decline.

Employment fell for the seven straight month in the Euro-zone according to the PMI survey, falling by a steeper pace in the services industry. French services saw a slight increase in activity according to the survey, beating expectations by rising to a 50.2 PMI.

Both German PMI for services and manufacturing declined at a sharper rate than expected by analysts. The index for factory production was reported at 43.3 for July, a 10-month low, which was lower than the expected 45.0; the index for services was reported at 49.7, a 37-month low and lower than the expectation for unchanged output at 50.00. Markit wrote in its PMI release that German business conditions are far less healthy now than in the first half of 2012.

Markit’s Chief Economist Chris Williamson said the PMI results show that the Euro-area downturn is showing no signs of letting up and he predicted a 0.6% decline for Q2.

The declining PMI's comes amidst a broader Euro-zone crisis, as Spanish regions have begun approaching the state for bailouts, and the IMF and ECB are arriving in Athens today to see if Greece will stand by its deficit cutting obligations required by the bailout agreement. Predictions of a Greek exit have begun to resurface over the past few days and the Euro remains sensitive to every update in the debt crisis.

The Euro took a brief rise against USD on the unexpected rise in French PMI for services before declining under the psychologically significant 1.2100 support following the worse than expected German PMI’s. EURUSD continues to trade slightly above 1.2100 as the composite PMI for all of the Euro-zone was as expected. Resistance should come in around a long-term resistance line at 1.2150.