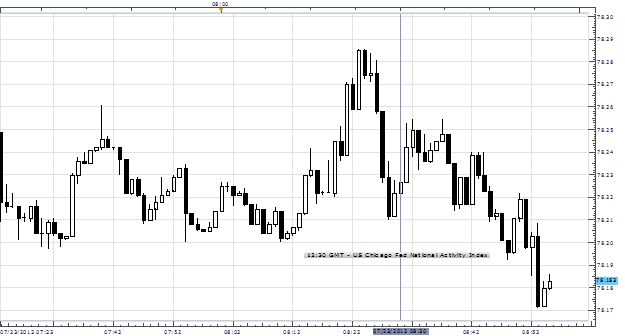 The Federal Reserve Bank of Chicago released a report today showing that the Chicago Fed National Activity Index (CFNAI), a weighted average of 85 economic indicators, increased to -0.15 in June from -0.48 the previous month. The reading in May was downwardly revised from -0.45 originally reported. A reading below zero signals below-trend growth in the U.S. economy and decreasing pressure on future inflation.

The rise in the CFNAI in June was led by improvements in production-related indicators. Of the four broad categories of indicators that make up the index, only the production and income category and the sales, orders and inventories categories improved in April. Meanwhile, the three-month average, which provides a broader perspective on recent growth trends, rose from -0.38 in May to -0.20 in June, the fourth consecutive reading below zero. June’s sub-zero moving average indicates that growth in national economic activity was below its historical trend, and suggests that we are likely to see subdued inflationary pressure from economic activity over the coming year.

In the minutes after data release, the U.S. dollar rose against risk-correlated currencies such as the Australian and New Zealand dollars. However, the greenback slipped against the Japanese yen, as investors shifted sentiment towards the alternative safe haven currency. At the time of this report, the USDJPY pair had fallen to 78.18 from a pre-data level of 78.22 yen.