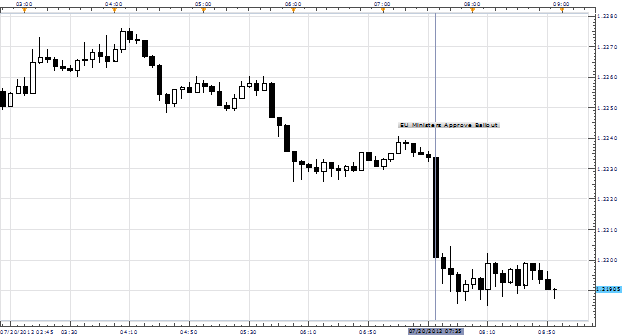 Finance ministers from the 17 euro nations gave final approval to a bailout worth as much as 100 billion euros for Spanish banks today. The eurogroup ministers approved the memorandum of understanding (MoU) based on their assessment that recapitalization of Spain’s financial institutions was needed to safeguard the financial stability of the euro area as a whole and to avoid a full sovereign bailout. The exact size of the loan will likely be determined in September, pending the results of bank stress tests.

According to a draft statement, the European Financial Stability Facility (EFSF) is expected to provide banks with the first tranche of rescue funds, worth 30 billion euros. This will include a 10 billion euro “longer-term prudential cushion” to be held in reserve as emergency funds. Banks will be able to receive funds once they have submitted restructuring plans in line with EU state aid rules. Bailout of Spanish financial institutions will start through the EFSF, while the 500 billion euro European Stability Mechanism funds remain on hold until a German court ruling due in September.

With Spanish bond yields continuing to soar, it remains unclear whether the bailout will do much to ease growing investor concerns that the Spanish government itself may need rescuing.

The euro took a nosedive after news of the bailout approval, tumbling almost 50 pips against the greenback. At the time this report was written, the EURUSD pair continued to trade lower at $1.2190.