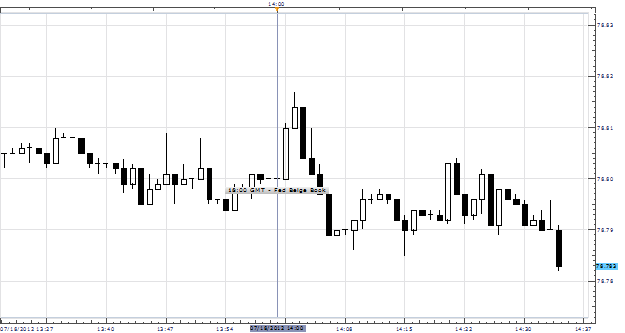 The Federal Reserve released the latest edition of its Beige Book report today. According to the report, overall economic activity in June and early July continued to expand at a “modest to moderate pace”, a slight contrast to the June edition which reported expansion at a “moderate pace”. The Beige Book report, which is usually released two weeks before the Federal Open Market Committee (FOMC) meets to set monetary policy, offers anecdotal evidence that helps policy makers assess the condition of the economy and actions going forward.

Overall, the Fed’s twelve regional banks reported that the housing market was largely positive as sales and construction activities increased, and home inventories fell. Manufacturing activity continued to expand slowly in most districts, though several reported a slowdown in new orders and shipments. Demand for non-financial services remained generally stable in most regions, while demand for loans, particularly those tied in to real estate, grew modestly in most districts.

On the price front, all twelve regions noted that input prices had stabilized in recent months, while price pressures were easing in several districts as energy costs declined. In terms of consumer spending, most districts reported modest increases in retail spending on a year-on-year basis, though many reported slower growth in recent months. The labor market continued to struggle, with employment levels growing at only a “tepid pace” as employers remained reluctant to increase wages or hire more staff until economic uncertainty eases.

The release of the latest edition follows Fed Chairman Ben Bernanke’s two-day semi-annual testimony to the U.S. Congress, in which Bernanke repeated the Fed’s June forecast that economic growth would continue at a “moderate” pace in coming quarters before picking “very gradually”. Both Bernanke's testimony and the Beige Book highlighted an overall slowdown in economic activity, but gave no signs of a recession or hints for further monetary easing.

In the minutes after the Fed’s Beige Book report was released, the U.S. dollar slid against the yen as the report offered little fresh optimism. At the time this report was written, the USDJPY pair was trading at 79.78 yen to the dollar.