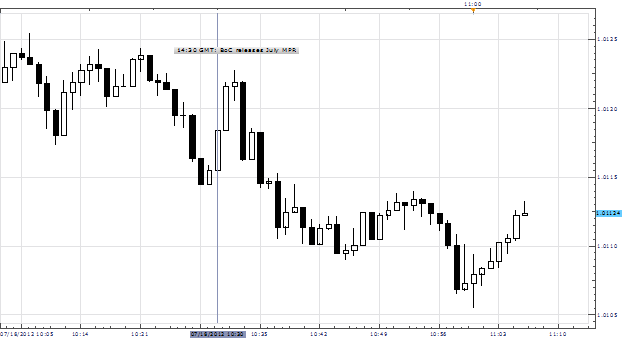 The Bank of Canada released its July Monetary Policy Report (MPR) today, in which it projected a gradual rise in interest rates through 2014. The Bank’s monetary policy committee announced its decision yesterday to keep its benchmark interest rate at 1.00 percent, the 15th consecutive time that the Bank has decided to keep rates on hold.

The Bank’s governor, Mark Carney, hinted yesterday at a possible rate hike in the near future despite the Bank trimming its economic growth forecasts from its April projection. The Bank now projects that the economy will grow by 2.1 percent in 2012, 2.3 percent in 2013 and 2.5 percent in 2014, with the economy reaching full capacity in the second half of 2013. In the latest MPR, the Bank noted that global growth prospects have weakened since April. The slowdown in global activity has dampened demand and commodity prices, which in combination with the persistent strength of the Canadian dollar, continue to restrain Canadian exports.

Although global headwinds are hampering Canadian economic activity, the Bank expects domestic factors to support moderate growth in Canada. The Bank anticipates that the economy will grow at a pace roughly in line with its production potential in the near term, before picking up through 2013. Consumption and business investment are expected to be the major drivers of growth, while Canadian export activities are likely to remain below their pre-recession peak until the beginning of 2014 and housing activity is expected to slow from record levels.

On the price front, core inflation is expected to remain around 2 percent over the project horizon. Based on ongoing lower oil prices, the Bank is forecasting total CPI inflation to remain “noticeably” below the 2 percent target over the coming year before returning to target around mid-2013.

The loonie strengthened against the greenback in the minutes after the Bank of Canada released its July Monetary Policy Report, as the Bank reiterated its projections to raise its benchmark interest rate in the near future. At the time this report was written, the USDCAD pair had trimmed gains but continued to trade higher at C$1.0112.

Key points from the BoC’s July MPR are summarized as follows:

- Housing is showing signs of overbuilding.

- Canadian economy was about 0.5% below capacity in 2nd quarter.