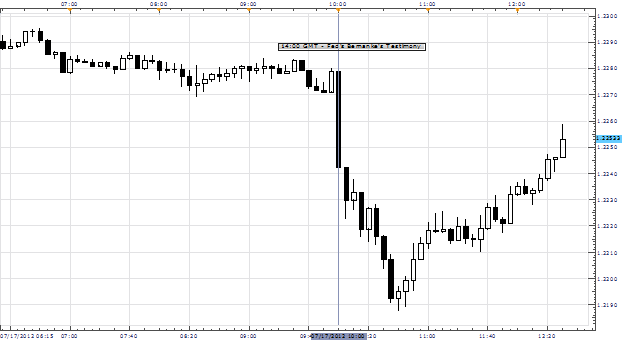 Federal Reserve Chairman Ben Bernanke stood before the Senate Banking Committee today with a prepared testimony on the Fed’s monetary policy. Bernanke gave no indication that the Fed would embark on another round of economic stimulus, reiterating the Fed’s pledge to act if needed.

In his address to the Senate, Bernanke said that progress in reducing unemployment is likely to be “frustratingly slow”, with household confidence remaining “relatively low” and consumer spending growth likely to slow in the second quarter of 2012. Despite a slew of disappointing economic data recently, Bernanke repeated the Fed’s June forecast that economic growth would continue at a “moderate” pace in coming quarters before picking up “very gradually”.

Bernanke also reiterated his concerns that the current fiscal policy will hamper economic growth, saying that planned cuts in federal spending at the end of the year could send the economy back into recession, while the projected long-term growth of spending was “unsustainable”. Overall, the Fed will continue with its wait-and-see approach on its monetary policy and is likely to maintain low rates through to late 2014.

With Bernanke giving no hints of further monetary stimulus, the greenback strengthened against its major currency counterparts. The U.S. dollar erased earlier losses against the euro, climbed to as high as $1.2188 during Bernanke’s testimony. At the time this report was written, the U.S. dollar had retraced some of its gains, with the EURUSD pair trading at $1.2252.

Key commentary from Bernanke’s testimony is summarized as follows:

- Manufacturing 'has slowed in recent months'.

- If Fed wants to ease, it could buy treasuries and MBS, use discount windows or cut interest on excess reserves.

- Fed comfortable it has tools to unwind policies.