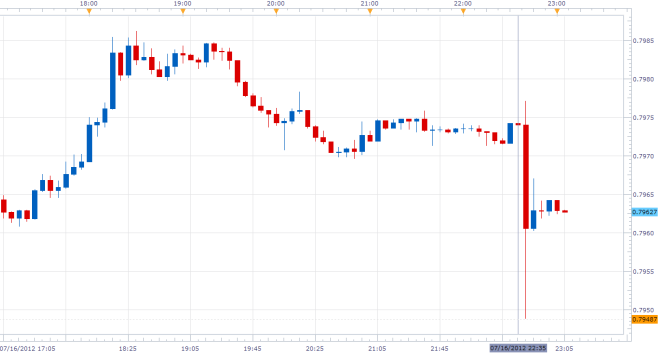 The NZDUSD fell nearly 30 pips immediately following the release of the New Zealand Q2 CPI data. CPI fell to 1.0 percent (YoY) from the 1.6 percent seen last quarter. Typically central banks will try to maintain a stable inflation rate around 2.0 percent, with consumers favoring the lower end of the spectrum. It may seem that the Reserve Bank of the New Zealand is successfully accomplishing its mission of maintaining price stability, well Europe fear the possibility inflation. Though having inflation too low puts New Zealand at the risk of deflation, which, makes for a poor environment for business and barrowing.

This week the Kiwi continued its rally that began last Thursday, and gained 0.24 percent against the US Dollar today. Following the release of the economic data the NZDUSD spiked to the down side, but retraced slightly to settle at 0.79627 (at time of writing).

Inflation fell a little over 4 percent during the past 12 months, and after today’s print the Reserve Bank of New Zealand may feel the need to take steps to increase inflationary pressures in New Zealand. These steps can materialize in the form of a rate cuts or open market operations to increase the money supply, both of which fundamentally lower the value for the Kiwi. According the rate swaps there is a 12 percent implied probability of rate cut at the next RBNZ meeting, and that probability may rise after the market digests the data released today. The next RBNZ rate decision is set for July 25, and after today’s number it will likely be a very significant event risk for the Kiwi.