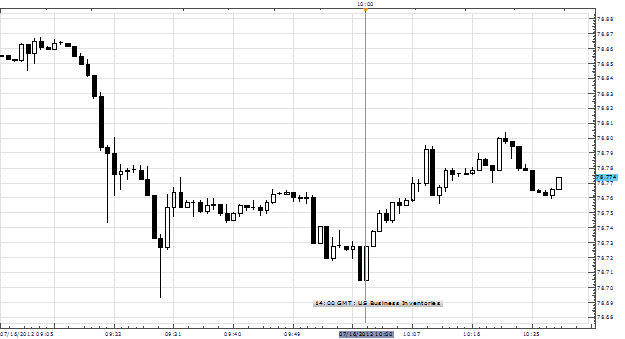 USDJPY Strengthens As Business Inventories Rose in May While Sales Fell

THE TAKEAWAY: [U.S. business inventories rose faster than expected in May; sales fell for second month] > [Orders to factories may slow] > [USDJPY strengthens]

Businesses in the U.S. rebuilt inventories at a faster pace than forecast in May while sales fell for a second month, indicating that orders to factories may slow. According to a report released by the Commerce Department today, inventory stockpiles rose by 0.3 percent in May, which follows two months of gains at the same pace. April’s figure was revised down to 0.3 percent from 0.4 percent initially reported. The median forecast of economists surveyed by Bloomberg News had projected a 0.3 percent increase in inventories. Meanwhile, sales fell 0.1 percent in May for a second month.

With the drop in sales and a slowdown in global economies, companies are likely to place fewer orders in the near term. Another report released today by the Commerce Department revealed that retail sales in the U.S. fell in June, as stagnant job growth and rising price pressures dampened consumer spending. Sales and inventories growth is likely to remain ‘sluggish’, which will continue to hamper U.S. economic growth.

In the minutes after business inventories figures were released, the U.S. dollar strengthened against the most of its major currency counterparts. The USDJPY pair rose from 78.68 to as much as 78.80, and at the time this report was written, was trading at 78.78 yen to the dollar.