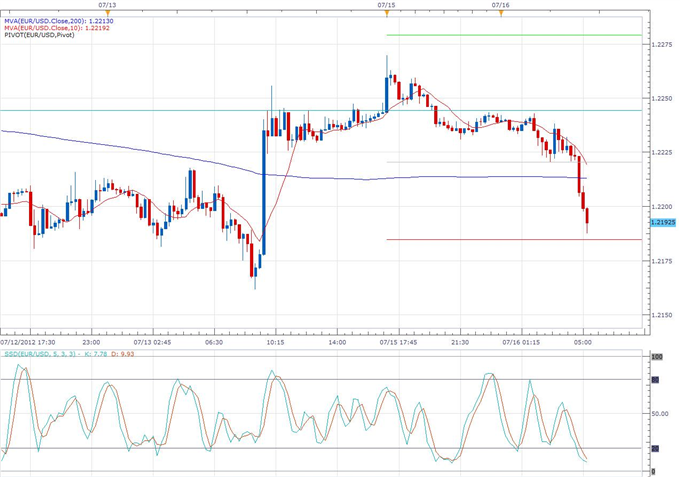 Euro-zone consumer prices unexpectedly dropped 0.1% in the month of June, but annual inflation remained at 2.4% for the second month. The steady inflation was in line with analysts’ expectations, but surveyed economists expected the CPI to remain unchanged in June. The fall to a 2.4% inflation rate in May set a new yearly low, according to Eurostat.

Greece had one of the lowest annual inflation rates in the Euro-are at 1.0% for June, while German inflation was reported at 2.0%. Alcohol and tobacco prices were up 4.9% annually, housing was up 3.7%, while communication costs were down 2.8% when compared to June 2011.

Euro-zone imports also fell 0.9% in May, while exports grew by 0.3%, according to a separate Eurostat report.

The above reasoning possibly explains the EURUSD drop below 1.2200 around the time of the report, as another interest rate cut would be negative for the Euro, but generally risk-positive. Earlier today, EURUSD had been retracing Friday’s rally that followed a better than expected University of Michigan confidence report. Before the report’s release, the pair set a fresh 2-year low at 1.2162, which could provide the next support for the declining pair.