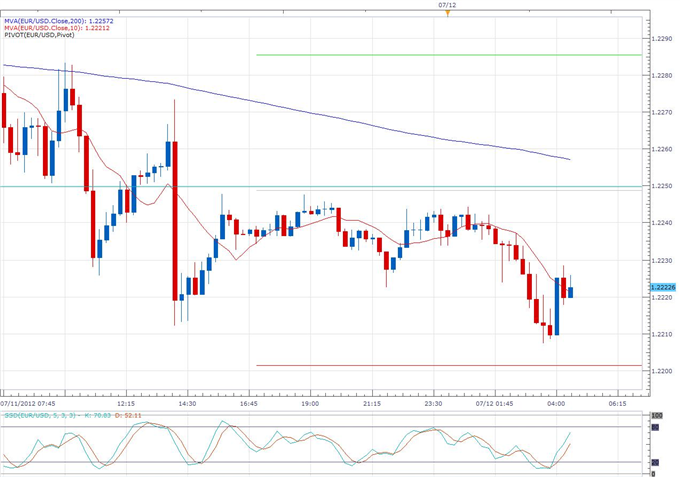 The European Central Bank decided to cut the key interest rate by 25 basis points in their July meeting because downside risks to the economic outlook have materialized and inflationary pressures were dampened by a drop in growth, according to the ECB monthly bulletin. They also forecasted a decline in economic growth for Q2 and maintained an inflation target rate slightly under 2%.

However, the ECB did predict a gradual recovery over the medium term, with adverse factors like high sovereign debt and unemployment. They said inflation will likely remain steady due to a balance of weak growth and higher than expected energy prices.

The ECB also welcomed the agreements made in the EU summit at the end of June and said that ‘economic and monetary unions need to be put on a more solid basis.’ They also volunteered to conduct the EFSF’s and ESM’s market operations, and welcomed the prospect of a single supervisory mechanism that can recapitalize banks directly, but they did not volunteer for that role in the bulletin notes.

Last week, the ECB lowered the interest rate to 0.75% for July, which was the minimum expectation among most analysts, and caused a selloff of risk related assets as those hoping for further monetary action were disappointed.

Euro made a small gain against the dollar at the time of the bulletin release, following continued declines that begun after yesterday’s release of the FOMC minutes and continued with news of Australian pay cuts and job losses. The ECB bulletin was fairly neutral and in line with market expectations for the ECB view, and the small Euro pop could have merely been a consolidation. EURUSD is currently trading at new 2-year lows above 1.2200, the next support comes in around previous support of 1.2143 or 61.8% expansion at 1.2133.