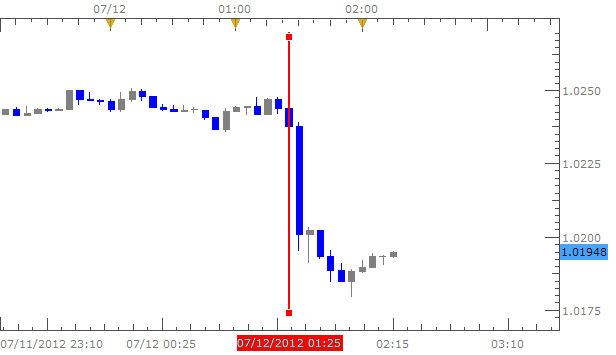 THE TAKEWAY: Australian economy lost 27,000 jobs in June > Change in employment falls short of projections, May employment figures revised to 27,800 from 38,900 providing confirmation that the Aussie economy may be slowing > Australian Dollar declines

The Australian Dollar depreciated in value versus most other currencies as the Australian labor market shows signs of weakness by losing 27,000 jobs in June. Market expectations called for no change, which missed significantly. Furthermore, employment change in May registered an addition of 38,000 jobs, but was revised to a much weaker 27,800.

The unemployment rate ticked slightly higher to 5.2% from 5.1%. Most of the labor decline took place in full time employment change as 33,500 jobs were lost in June compared to 36,400 full time gains last month. The declines in June mark the first month of job loss since February of this year when the economy shed 13,600 workers.

Employment figures typically lag the business cycle because firms are reluctant to cut labor partly due to the high cost of training new labor once business activity picks up and will hold off on cutting until most other costs are reduced first. This suggests that the Australian economy is probably in a more dire state than the dismal jobs data reports.

The higher yielding Aussie currency may likely suffer losses versus safe-haven currencies, such as the U.S. Dollar, if economic conditions trend unfavorably.