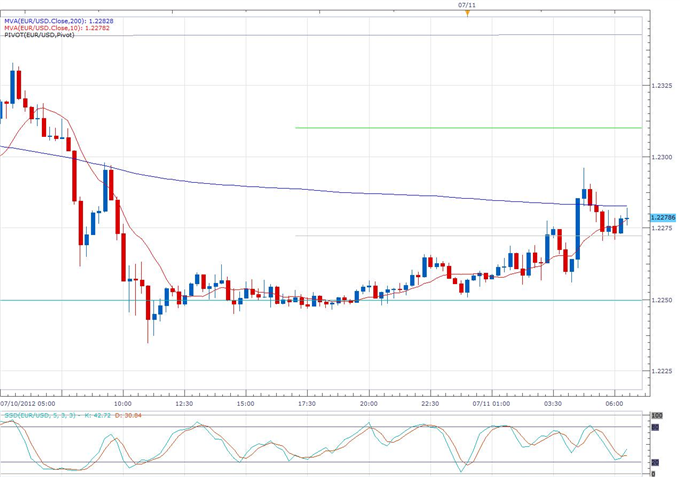 Traders viewed Spain’s 65 billion Euro austerity plan, which was announced earlier today by PM Rajoy, as a reason to increase their risk appetite; and therefore every major currency rallied against the safe haven US Dollar during the European session. The austerity plan that puts Spain at risk of further recessions will raise sales tax by 3%, cut bonuses for government workers and consolidate local governments. It will take 2.5 years to cut the 65 billion Euros, and the plan is double the amount of previously announced deficit cutting.

Spain is currently set to receive up to 100 billion Euros in aid for bank recapitalization and during this week’s meeting of Euro-zone finance ministers, the ministers gave Spain an extra year to bring its budget deficit down to the EU required 3%. While announcing the budget cuts, PM Rajoy warned that Spain is in the second-worst recession in the country’s history.

Spanish 10-year bond yields have so far dropped 4.2 bps today to 6.691%, from nearly 7% earlier this week. The rise in Spanish bond prices brought a boost to risk-correlated currencies, however there is still a clear pressure on the Euro, which has already reversed some of the day’s gains and is only up 25 points from today’s open, less than half the gains of GBDUSD and AUDUSD.

European leaders have yet to produce a direct bank recapitalization program that will help Spain, despite the two days of meetings between European finance ministers that concluded yesterday, and the top German court must allow for the parliament to approve a permanent ESM bailout fund. Rajoy urged that the direct bank recapitilazation plan, agreed upon at the EU Summit two weeks ago, be implemented quickly so as to allow the funding of Spain’s failing banks without adding to Spanish deficit.

In other European news, German inflation in June was confirmed to be the lowest in 18-months, at 1.7%. This was in line with initial estimates and did not move markets. German 10-year bonds were also sold in an auction today for record low yields of 1.31%.

Attention is now turned towards the US trade balance and the release of the minutes from the Fed’s June meeting, which are both set to take place during the North American session.