After briefly trading back to 1.2300 earlier in today’s session, the EURUSD has put in fresh 2012 lows at 1.2235. Earlier today, Euro-zone finance ministers announced that €30 billion would be available to help bailout Spanish banks by the end of July, signaling the first such step forward to help recapitalize heavily indebted banks.

Furthermore, Spain was given an extra year to meet its deficit targets, which could be supportive of stronger growth in the near-term. The Spanish economy ministry noted today that the recapitalization plans should take approximately 18-months, and we thus believe that this will be the first of many bailouts for Spain.

Yet this news isn’t driving the Euro (the aid is helping push Spanish yields lower, though). Instead, it is news out of Germany that’s having the greatest impact on the common currency. After rumors earlier that the German constitutional court was set to rule in favor of the legality of the European Stability Mechanism, quite the opposite has happened: the judge presiding over the case has said it could take up to three-months to review the ESM. Certainly, with the ESM originally forecasted to come online by this week, this is not a strong development for the Euro-zone crisis.

Also out of Europe is the International Monetary Fund’s report on the Italian economy, and that too has fanned the risk-aversion fire. The IMF revised its deficit forecast for Italy up to 2.6% of GDP from 2.4%, which was last revised in April. Despite Prime Minister Mario Monti’s “ambitious” efforts to spur growth in Italy, the IMF report noted that “Italy remains vulnerable to contagion from the [Euro-zone].” In sum, the combined effect of these developments has been extremely Euro-negative.

The Euro has slid most substantially against the Japanese Yen and the US Dollar, as is typical during times of risk-aversion. The EURUSD dropped from 1.2298 to as low as 1.2235, a fresh 2012 low and the lowest level in over two-years. Similarly, the EURJPY, which is currently entrenched in a Head & Shoulders bearish reversal on the hourly charts, fell from 97.63 to as low as 97.22.

Presented below are the IMF’s revised projections for the Italian economy: 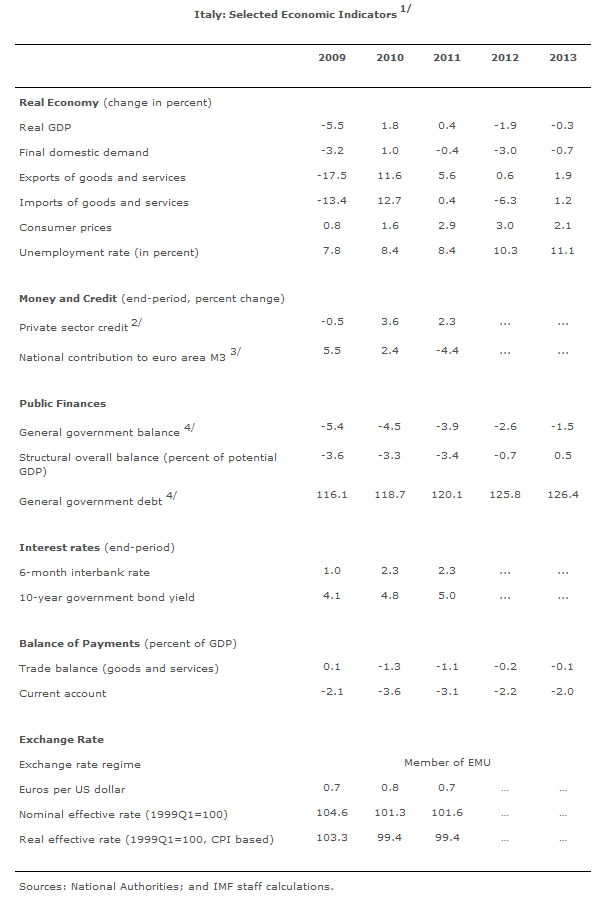