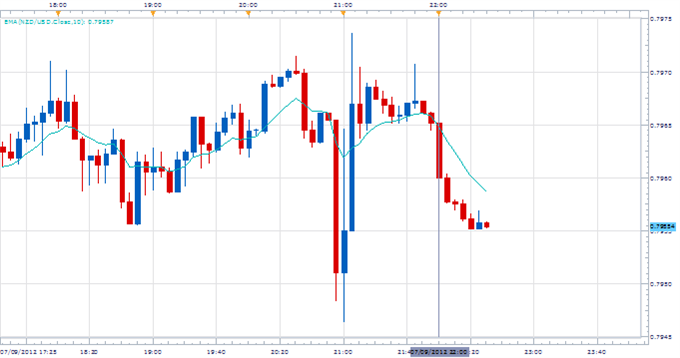 The New Zealand Business Opinion Survey dipped 4 points below zero during the second quarter; the NZDUSD began to decline on the news. During Q2 New Zealand has been negatively affected by a strong currency, weak economic outlook among its major trading partners, and the fear of a slowdown in global growth. The decline in the survey was fairly modest relative to recent pull backs in the data. The modest declines come at a surprise given the fact that the Euro-Zone crisis now posses more a threat to the health of the New Zealand economy than ever before. Recently many of the economies linked to the Euro-Zone have begun to cut interest rates, which hurt New Zealand trade advantaged. The effect to the New Zealand currency is compounded by the lower demand for New Zealand exports. The negative print mean there is pessimism among business leader, but level of pessimism may increase as many began to fear that the Euro-Zone crisis will began to interrupt other economies.

The results of the Business Opinion Survey came in the midst of a correction in the NZDUSD. Since the ECB rate decision the NZDUSD has been giving back the gains made during the EU Summit. Following the release the pair continued its decline falling 10 pips at time of writing to rest below its 10 period Moving Average.

The modest declined in the New Zealand Business Opinion Survey left the door open for much more severe cuts in New Zealand outlook. On Friday one of New Zealand’s largest trading partners reports their Q2 GDP. A poor print of Chinese GDP would mean lower demand for New Zealand natural resources, thus raising the level of pessimism among business leader in New Zealand and increase the possibility of a greater correction in the currency.