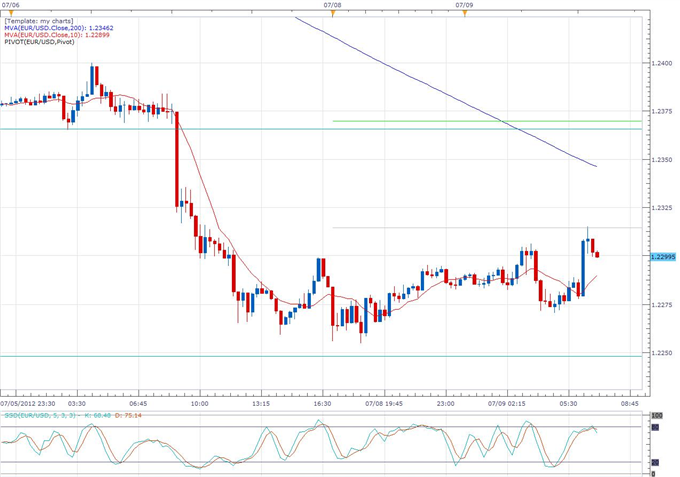 Can Euro-zone Ministers Walk the Walk?

We heard EU leaders talk the talk at the EU summit at the end of June, promising a joint banks supervision scheme, ESM/EFSF bailout funds with authorization to directly recapitalize banks, and priority given to non-bailout fund creditors (full summit statement here). Today, we will see if EU leaders can walk the walk at the meeting of Euro-zone finance ministers at 15:00 GMT in Brussels.

Today’s meeting is intended to start putting into action the agreements made at the June summit. There has already been some minimal resistance from Finland and the Netherlands, when it was reported last week that the two countries would stop the ESM from buying bonds in the secondary market. Traders will likely sell risk-related assets if signs of disaccord between leaders at the meeting appear to be more significant than initially estimated, while significant advances made at the meeting could produce the opposite effect.

Some of the initial chatter ahead of the meeting include the German Finance Ministry saying that the ESM changes will be implemented in the next week, it has also been reported that the Cyprus bailout package will be discussed today.

Meanwhile, at 12:30 GMT ECB president Draghi will speak to the parliament, where traders will look for explanations of last week’s minimum monetary action that knocked down risk-correlated assets to record lows.

Monday’s trading session has thus far brought relatively calm trading among the major European currencies. EURUSD has fought with a 1.2300 resistance over the past few hours, while Cable traded underneath 1.5500.

In European news, Swiss unemployment in June was unchanged from May’s revised 2.7% rate. German exports bounced back from April’s declines for a 3.9% gain in May. Neither of these better than expected news releases managed to significantly move currencies.