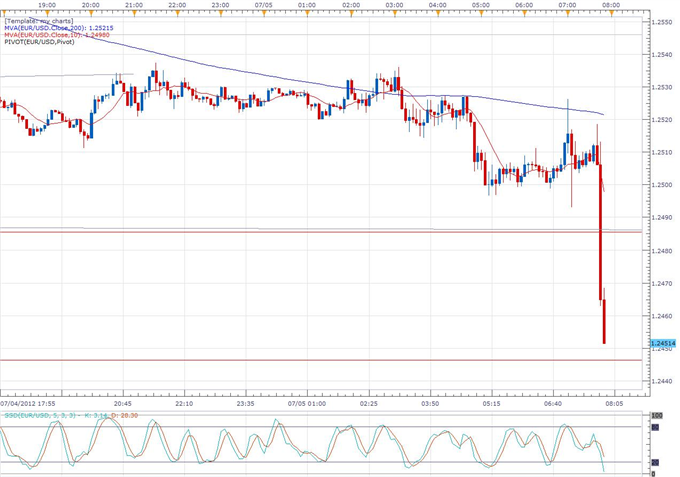 It was a big day for European central banks, as both the ECB and BoE changed monetary policy, moving the Euro and GBP in opposite directions.

The ECB cut interest rates to 0.75% during their July meeting, and cut its deposit rate to zero from 0.25%. Euro collapsed under 1.2500 for the first time this week, following the expected announcement.

The BoE did not disappoint those looking for further stimulus to the struggling UK economy. The central bank raised their asset purchase program from 325 billion pounds to 375 billion, as expected. Increased stimulus is usually negative for the local currency, but cable jumped back towards 1.5600 resistance following the news. The move higher could be attributed to a general rise in risk appetite following stimulus news, or maybe just a case of ‘buy the rumor and sell the news’.

The only news that concerned the market ahead of the central bank decisions was today’s Spanish bond sale. Although Spain met its maximum 3 billion euro target during the debt sales, 10-year bond yields were still up to 6.43%, higher than the 6.044% yields from June’s sales. This sent EURUSD down to 1.2500.

A little more than an hour before the ECB rate decision, Germany surprised analysts with a 0.6% rise in factory orders. This usually relevant indicator was ignored, despite contradicting recent bearish German PMI’s, as traders kept their focus on the upcoming monetary decisions.

In other news, UK Halifax house prices were reported 1.0% higher during the month of June, complying with the theme of higher than desired inflation in the UK despite a recession.