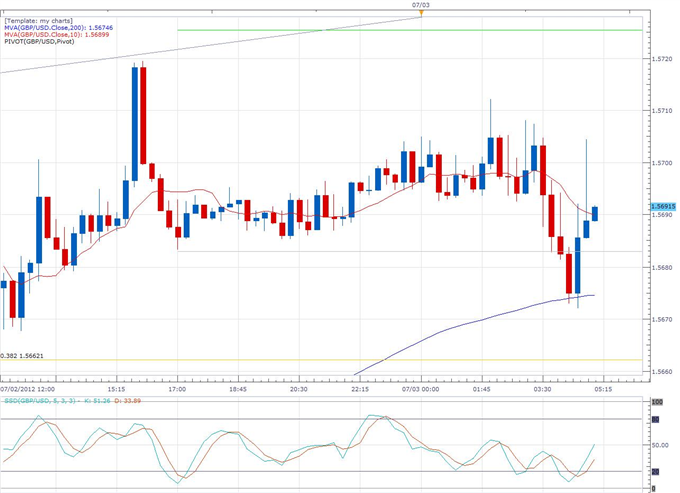 THE TAKEAWAY: UK PMI for construction for June at 48.2 -> Mortgage approvals drop to 51,098 in May ->Sterling consolidates in today’s trading

Another sign of a slowing economy emerges from the UK as construction output during June has declined for the first time in a year and a half, according to Markit Economics’ Purchasing Managers’ Index. The 48.2 PMI was a surprise when compared to the mean analysts’ expectation for the index to fall to 52.9 from May’s 54.4 survey result. A PMI under 50.0 indicates less output in the sector.

Civil engineering and housing activity were the worst performing areas of construction, while commercial activity was still slightly up in June. The PMI set a new 2-year low.

Additionally, mortgage approvals to buy homes for the month of May fell to 51,098 from May’s revised 51,627 loan approvals. However, this was still better than analyst’s projections for 50,000 approvals.

UK M4 money supply was also down -0.1% during the month of May. The money supply is used by the Bank of England as a gauge to see how effective their asset purchase program is.

The lower construction and mortgage approvals both point to an economy that continues to suffer from the effects of the Euro debt crisis. The Bank of England is widely expected to raise stimulus in their July meeting, as both the minutes from June’s meeting and recent comments by Governor Marvyn King show a growing concern over the faltering economy.

Cable has consolidated in today’s trading below 1.5700, as the there has been relatively little news from Europe. GBPUSD took a small jump closer to 1.5700 following the better than expected mortgage approvals, but remained within the earlier trading range.