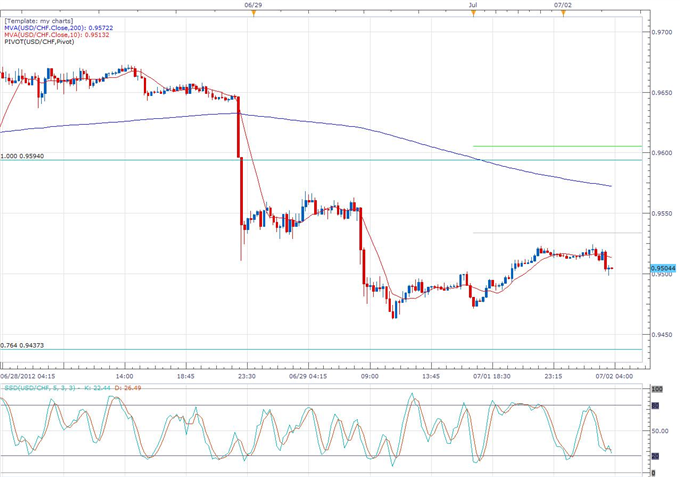 The Swiss retail sales annual growth rate hit a 3 year high during the month of May, coming in 6.2% higher than May 2011. Retail sales also grew at a real 1.0% rate from the month of April, according to the Swiss Federal Statistical Office.

Retail sales of food, drinks and tobacco grew 3.7% (real) when compared to sales during May 2011, non-food sectors grew 6.8% over the same period.

Following the impressive boost in retail sales, the Swiss Purchasing Managers’ Index for manufacturing was reported at 48.1, thereby showing a decline. However, the PMI was better than expected and indicates that the drop in Swiss manufacturing is slowing.

The strong retail sales come only days after the KOF economic indicator showed that the Swiss economy is expanding at a faster pace. The Swiss economic growth is surprising when compared to its neighboring Eurozone and British economies, which are suffering from the Euro debt crisis.

Just yesterday, Swiss National Bank President Thomas Jordan told the SonntagsBlick newspaper that the bank will continue to enforce the 1.2000 floor in Euro/Franc trading to prevent deflation. Despite growth in the Swiss economy, the flee from the Euro into the Franc as the debt crisis worsens, continues to place deflationary pressures on the Franc, which can hurt Swiss exports to its neighbors in the region.

The Swiss Franc strengthened against the US Dollar following the retail sales news, USD/CHF fell towards .9500 support. Earlier today, the pair corrected higher from the major decline that happened during Friday’s trading, as risk correlated currencies soared on the news of agreements made during the EU summit.