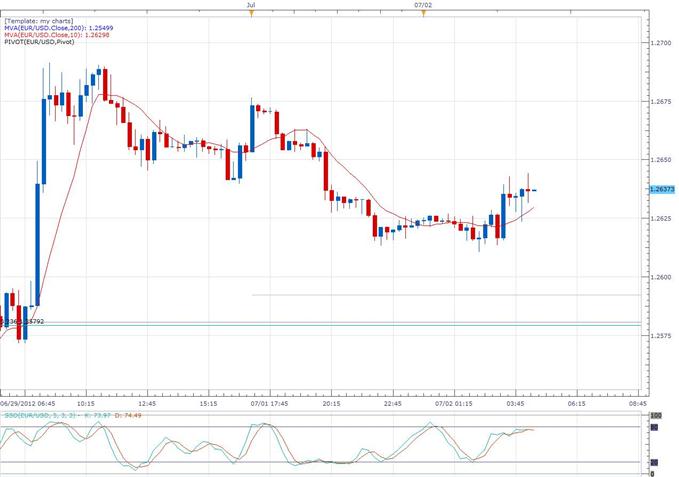 Eurozone PMI for Manufacturing is Not as Bad as Initially Estimated

THE TAKEAWAY: Eurozone PMI manufacturing reported at 45.1 for June, beats initial estimates -> Eurozone and German factory output is signaled to have declined at the fastest pace in 3 years -> Euro reverses some earlier contraction

The Eurozone continues to deliver further signs of a shrinking economy, as the Purchasing Managers’ Index for manufacturing came in at 45.1 for June, unchanged from May’s index which indicated the fastest slowdown in factory output in 3 years. However, the PMI was better than previous estimate of 44.8, but still below 50.0 for the eleventh straight month, signaling nearly a year of declining output.

Germany’s PMI for manufacturing was reported at 45.0, which although it is a 3-year low, was still better than the initially estimated 44.7. Ireland’s PMI was reported at 53.1, a 14-month high for the factory output indicator, while Spain’s PMI was measured at 41.1 and indicated the fastest decline in manufacturing in over 3-years.

The measured drop in manufacturing output, which is a main factor for the PMI, was one of the steepest declines in 3 years. Employment also fell at the fastest rate in 2.5 years, with job losses seen in all Eurozone countries except Ireland.

European leaders came to noteworthy agreements at the end of the EU summit last week, allowing direct recapitalization of lenders and loosening requirements for bailout agreements, all in hope of reversing recent economic suffering resulting from the crisis.

The European Central Bank will be meeting later this week to set July’s interest rates and may decide to add to the fiscal policy changes with its own actions, therefore most economists measured by Bloomberg are predicting a 25 basis point rate cut.

The Euro has been consolidating in today’s trading, following Friday’s rally towards 1.2700 on news of the summit agreements. EUR/USD saw a slight rise ahead of the better than expected PMI’s and continues to trade near 1.2640.