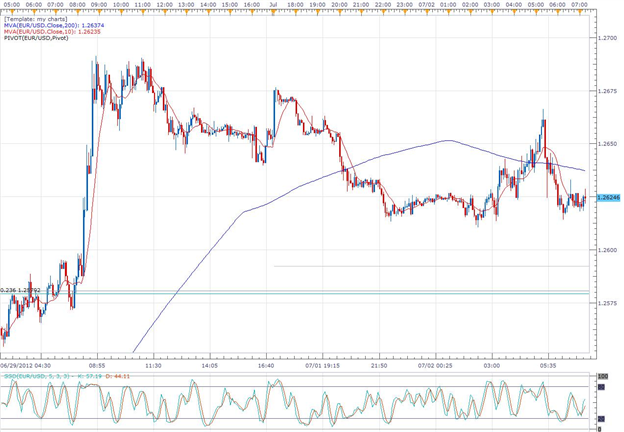 Euro Keeps Some of the Gains from Last Week's Euphoria

Monday’s European session saw a steady correction lower for risk correlated currencies, coming down from the weekly highs set at the end of Friday’s session on news from the EU summit. Direct recapitalization to lenders and looser bailout conditions were some of the agreements made by the European leaders, and although some of Friday’s gains were lost today, EURUSD is still trading 150 points higher than before the summit and above the 1.2600 psychological resistance. The Euro decline may also be partially due to the Finnish government announcing it plans to block the ESM from buying bonds from the secondary markets.

The surprise of the session came from Switzerland, which reported retail sales for May that were 6.2% higher than May 2011, the highest annual growth rate in more than 3 years. The Franc briefly reversed its earlier session correction following the release, as did the Sterling and Euro, before returning to drop again.

Additionally, UK PMI for manufacturing indicated declining output for a second month and European unemployment climbed to 11.1% as expected, but neither pieces of news had a notable effect on the markets.

Following last week’s fiscal policy change, economists have now turned their attention towards Thursday’s European Central Bank meeting. The median expectation among Bloomberg surveyed analysts is for the ECB to cut its interest rates 25 basis points to 0.75%. An ECB interest rate cut has the potential to be Euro negative, but risk-positive across all financial markets.