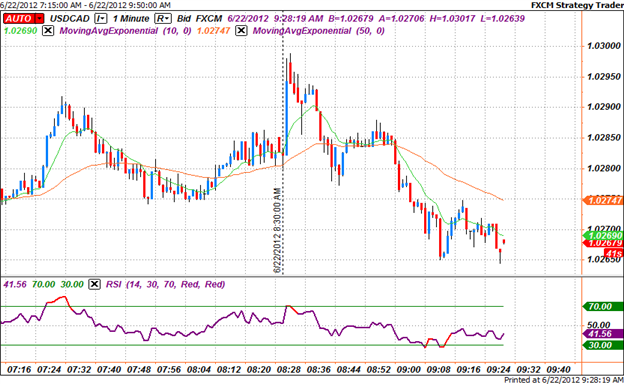 THE TAKEAWAY: Canada Consumer Price Index Declined 0.1 Percent in May > the Inflation below Target might Encourage Bank of Canada to Preserve its Low Interest Rate Policy throughout 2012> CAD Strengthens vs. its Major Peers

Canadian consumer prices unexpectedly deflated for the first time in five months in May, mainly triggered by substantial decline in energy costs.

Canada's Consumer Price Index (CPI) is at a current level of 122.1, down 0.1 percent from a revised 121.7 in April, the Ottawa-based Statistics Canada reported today. The reading missed consensus forecast of a 0.2 percent gain from Bloomberg News survey. Meanwhile, the all items index increased 1.2 percent in the twelve months to May compared with 2.0 percent advance in April. The figure was also well below economists’ expectation of 1.5 percent.

Annual rate of price increases edge downed more than forecast in May as a result of significant drop in energy costs and fall in clothing price. The year-over-year energy index plunged 1.6 percent, its first decline since October 2009, mainly attributable to easing pressures in natural gas prices (-16.6%) and gasoline prices (-2.3 percent). Price declines in gasoline cost also pushed the transportation cost increase to slower rate, 0.8 percent compared with 3.2 percent increase in the previous month. Similarly, prices for clothing and footwear were down 0.3 percent in the twelve months to May, reversing a 2.4 percent rise in April. On the other hand, higher prices for food (+2.5%) and electricity (+5.4%) helps eclipse a fall in the overall cost of living in Canada.

The Bank of Canada’s core rate, stripping out volatile items such as food and energy products, surged 1.8 percent on yearly basis, following a 2.1 percent increase in April. The figure is lower than the Bank’s inflation target of 2 percent. On the monthly basis, the seasonally adjusted core index was unchanged in May after having risen 0.4 percent in the previous month.

The Bank of Canada Governor, Mark Carney, recently signaled the possible withdrawal of the present considerable monetary policy stimulus like interest rate hike in case economic expansion continues and excess supply is gradually absorbed. Additionally, the key rate increase might help rein in rising household debt levels and cool down Toronto’s stubbornly hot real estate market. Nonetheless, the inflation numbers released today that are below targets might spark speculation that the Bank of Canada would preserve its low interest rate policy throughout the remainder of this year.

The Canadian dollar gains ground versus most of its major peers except its New Zealand counterpart ahead of an opening bell in North America trade today. In the minutes following the inflation report, the loonie briefly dropped 15 pips against the dollar from $1.0280 to $1.0295 before resuming its gain to $1.0265. At the time this report was written, the loonie strengthens 0.28 percent against the reserve currency, trades at C$1.0269 per greenback.