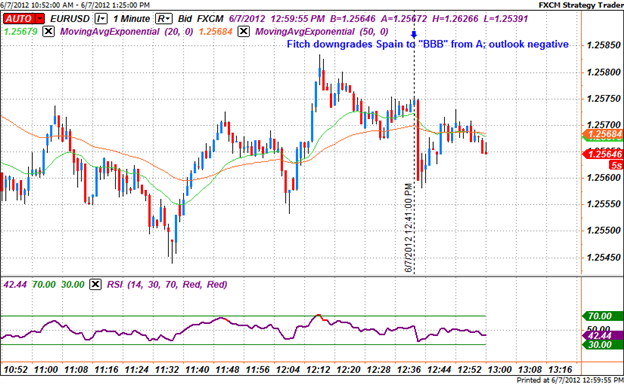 THE TAKEAWAY: Fitch Downgrades Spain’s Sovereign Ratings to “BBB” from “A”; Outlook Negative > the Downgrade Bolstered Uncertainty in the Eurozone that Forced Spanish Government to Seek for Bank Aids from EU> Reactions on Euro Fairly Muted

Fitch Ratings has lowered Spain’s Long-term foreign and local currency Issuer Default Ratings (IDR) by three notches to “BBB” from “A”. Similarly, the Short-term IDR has been cut to “F2” from “F1”. The Outlook on Spain’s sovereign ratings remains Negative, pointing to escalated risk of further downgrades. Fitch has simultaneously affirmed the common Euro Area Country Ceiling for Spain at “AAA”.

The rating agency cited the nation’s double-dip recession, huge fiscal cost of restructuring and recapitalizing the Spanish banking sector, and high level of foreign indebtedness as main reasons for the downgrades. Spanish Gross Domestic Product (GDP) shrank by 0.3 percent in the first three months of 2012, confirming an anticipation that the country is to remain in recession through the remainder of this year. The potential cost of rescuing banks is now estimated to be around EUR60 billion (6% of GDP) and up to EUR100 billion (9% of GDP) in a more severe stress scenario that is more than triple Fitch’s previous baseline estimate. In addition, the “much reduced financing flexibility” of the government has restrained its ability to decisively restructuring the banking sector and to increase the likelihood of external financial support. More seriously, Spain’s widening budget deficit has rendered it especially vulnerable to contagion from the ongoing crisis in Greece.

Given Spain’s deteriorating economic position and deepening crisis in its banking system that requires larger emergency funding to recapitalize than Madrid can afford, the government is more than likely to seek for international rescue package, like Greece, Ireland and Portugal did. Luxembourg Prime Minister Jean-Claude Junker in his conference today also expressed his concern over Spanish banking sector and affirmed that Spain will get Euro-area bank aid if the nation requests. The current euro rescue fund, the European Financial Stability Facility (EFSF) also said that control over Spain’s bank aid needs to be “lighter” than in the case of regular bailout program.

Fitch’s announcement on Spain downgrades came with no surprise as market participants had predicted this rating cut sooner or later after Standard & Poor’s Ratings Services has revised down its economic risk score on Spain and lowered ratings on five Spain-based financial institutions. As can be seen from the 1-minute EURUSD chart above, the euro declined 15 pips against the dollar from 1.2575 to 1.2560 after the downgrade, but immediately witnessed some correction to 1.2570 then.