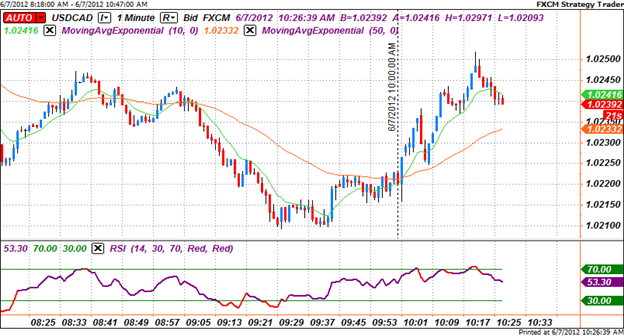 Purchasing activity in the Canadian economy gathered pace in May since price pressures have eased in the month on falling gasoline cost.

The Canadian Ivey Purchasing Managers Index (PMI) surprisingly climbed to 60.5 on a seasonally adjusted basis in May from 52.7 registered in April, the Purchasing Management Association of Canada and the Richard Ivey School of Business jointly reported today. The reading was still low compared to May 2011’s 65.5 and close to May 2010’s 59.5. The print, however, beats consensus forecast of 54.5 from Bloomberg News survey. Figures over 50 indicate expansion; otherwise values below 50 signify contraction.

The Ivey Employment Index for May fell back to contraction territory for the first time in six months, indicating that employment situation is worsened from the previous month. The index plunged to 46.3 from April reading’s 52.2 as the ongoing weakness in the real economy coupled with the slowdown in private sector consumption drag on hiring. Economists have expected the Canadian economy to modestly add another 7.5 thousand jobs in May that keeps the unemployment rate unchanged at 7.3 percent.

Price pressure continued to cool down with the prices index standing at 58.5, the lowest level since August 2010. Inflation CPI appears to have entered a period of stability near the central bank target of 2.0 percent in recent months.

The Ivey Supplier Deliveries Index continued to decline to 47.9 in May from 49.3 in the previous month, pointing to further contraction in deliveries last month. Similarly, inventories disappointing slipped to 51.1 from April’s 56.8, suggesting that inventories expanded at a slower pace from the prior month.

As the commodity currency, the loonie received a boost from reemerging risk appetite after China cut its borrowing costs for the first time since 2008 to 3.25 percent from 3.5 percent earlier today in an effort to combat a deepening slowdown. Regardless, the Canadian dollar pares gain versus the safe-haven currencies despite PMI report showed stronger-than-expected result as the Fed Chairman Bernanke’s Testimony held at the same time has overwhelming effect. The loonie edged down approximately 35 pips from 1.0215 to 1.0250 against the greenback within 15 minutes.