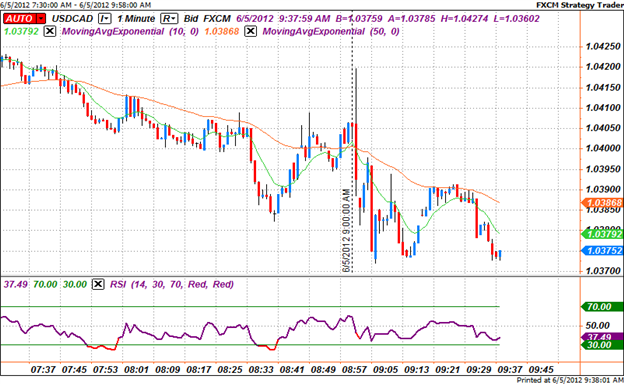 THE TAKEAWAY:Canadian Central Bank Keeps its Benchmark Rate at 1.00% > the Global Growth Outlook Weakened while Canadian Growth is Less Balanced and Inflation is Well-anchored > CAD Slips vs. Most Major Peers

At the monetary policy meeting today, the Bank of Canada decided to maintain the key interest rate at 1.00 percent for the thirteenth time in a row, extending its longest rate pause since the 1950s. The target rate has left unchanged since September 2010, after seeing three consecutive 25 basis points hikes from 0.25 percent. Bank of Canada’s rate decision has not surprised the market as it matched with median projections from Bloomberg News survey. The Bank Rate is correspondingly 1.25 percent and the deposit rate is 0.75 percent.

The Bank cited weakened global growth outlook and slower-than-expected domestic growth as the main reasons to postpone its interest rate increase. Since the Bank released its April Monetary Policy Report (MPR), the global economiccondition has deteriorated in recent weeks. Risks around the European crisis has escalated including political turmoil in Greece and its possible Euro exit, fears of bank crisis in Spain and threat of debt contagion in the Eurozone. Additionally, the U.S. economy continues to recovery at a modest pace and emerging-market economies have slowed.

Last Friday’s GDP report showed that Canadian economy expanded at annualized rate of merely 1.9 percent compared to the central bank’s forecast of 2.5 percent, and remained unchanged from fourth quarter growth. The composition of growth has become “less balanced” as housing activity is stronger than anticipated but households continue to add to their debt burden due to modest income growth.On the price front, inflation appears to have entered a period of stability with core consumer price index is expected to remain around the bank’s inflation target of 2 percent.

The Bank also reiterates in its statement that “persistent currency strength” of the Canadian dollar has been an ongoing challenge for the world’s tenth largest economy sincethe domestic currency appreciation dampens foreign demand and hurts net exports. Canadian policy makers continued to endorse wait-and-see approach while signaling about the possible withdrawal of the present considerable monetary policy stimulus in case economic expansion continues and excess supply is gradually absorbed. “The timing and degree of any such withdrawal will be “weighted carefully” against domestic and global economic developments”, the Bank noted.

In the minutes following the Bank of Canada rate decision, the Canadian currency immediately pared gains versus its major currencies. As can be seen from the 1-minute chart above, the USDCAD pair dropped approximately 40 pips from 1.0420 to 1.0375 within five minutes. Apparently, ongoing weakness in global economy and stable inflation dampen speculation for the interest rate hike on any time soon. At the time this report was written, the New Zealand dollar was traded at $1.0375