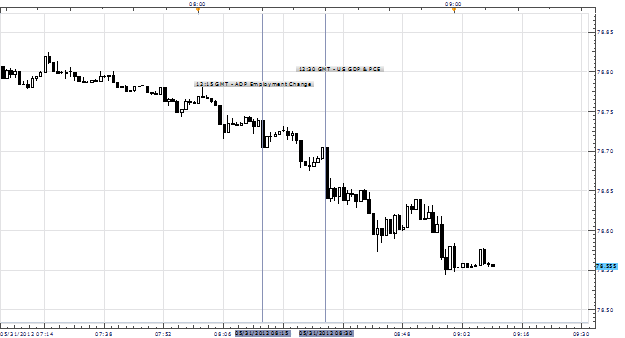 The U.S. economy grew less than initially estimated in the first quarter of 2012, reflecting smaller gains in inventories and larger government cutbacks. The second release of the headline growth reading by the Bureau of Economic Analysis showed that real Gross Domestic Product (GDP) grew at a modest 1.9 percent rate in the first quarter, down from the 2.2 percent initial reading. This follows 3.0 percent growth in the previous quarter, which was the fastest rate since mid-2010. The revised first quarter reading falls in line with the consensus forecast of 79 economists surveyed by Bloomberg News. This comes as little surprise given that China and the Euro zone, which are two of the United States’ largest trading partners, faced declining growth prospects through the first few months of the year.

On the other hand, the price index for GDP purchases, a gauge of prices paid by U.S. consumers, rose 1.7 percent in the first quarter, beating expectations for a 1.5 percent increase. This marks the third quarter of gains in the GDP price index. Meanwhile, U.S. personal consumption expenditure (PCE) came in at 2.7 percent in the first quarter. Although the latest print comes in lower than the initial reading of 2.9 percent, personal consumption remains at its highest level since the fourth quarter of 2010.

The GDP and PCE data release follows the release of the ADP National Employment Report, which showed that job creation in the U.S. private sector rose in May. According to the ADP report, private-sector employment increased by 133,000 in May on a seasonally adjusted basis, improving on April’s figure of 113,000, which was revised from 119,000 initially reported. The median forecast of 39 economists polled by Bloomberg News had called for an increase of 150,000 jobs. The rise in employment in May was led by gains in the service-providing sector, while employment in the manufacturing and construction sectors declined for the second month.

The greenback fell slightly following the weaker-than-expected ADP employment change data release, with the disappointing data giving weight to speculation for further quantitative easing by the Federal Reserve. The U.S. dollar continued to decline further on the back of the weakening U.S. economic growth, falling as much as 20 pips against the Japanese yen from pre-release levels. At the time of this report, the USDJPY pair continued to trade lower at 78.56 yen.