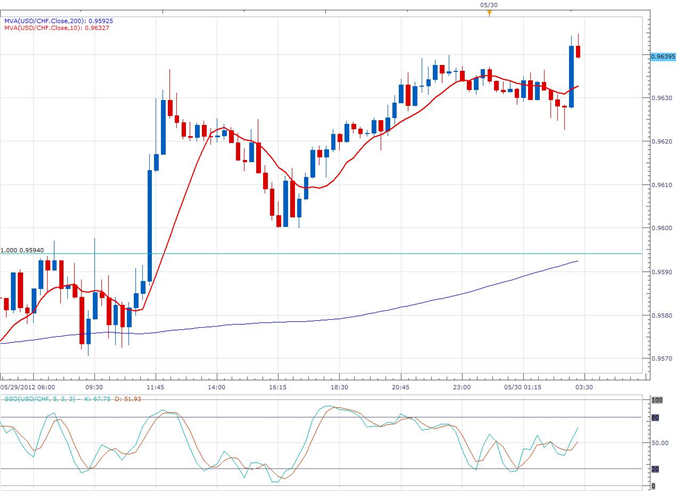 KOF Indicator Adds to Signs of a Growing Swiss Economy

Signs of Swiss economic growth are increasing as the KOF leading indicator rose for the third straight month. The economic baramoter for May came in at 0.81, setting a seventh month high and beating analysts’ expectations of 0.40. April’s leading indicator was revised higher to 0.43 according to the KOF economic institute.

A higher KOF leading indicator suggests a growth in Swiss GDP in the upcoming months. The indicator measures recent business developments, current activity and future expectations from various business sectors and it aims to predict GDP growth 8 months into the future.

Only yesterday, the UBS consumption indicator also came in higher then expected, due to growing consumption and higher consumer sentiment in Switzerland. Both indicators point to an expanding Swiss economy in the upcoming months, yet analysts are predicting no change in Q1 GDP for tomorrow’s release.

When likely Swiss growth is contrasted to the ECB forecast of a Eurozone economic contraction, it furthers sentiments that see the franc as a safe haven from the euro. This adds to the worry that was recently address by Swiss National Bank President Thomas Jordan, who said that a government-led panel is considering controls on capital inflows as a way of stopping further franc strengthening against the euro.

The Swiss franc surprisingly fell against the dollar in the minutes following the strong economic indicator, as the USD suddenly rose against its peers. EUR/CHF continued to trade around 1.2010, as the Swiss National bank reinforces a 1.2000 floor.