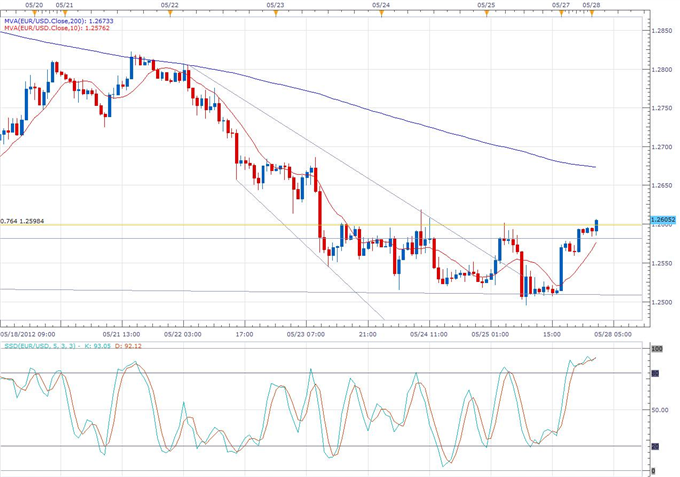 THE TAKEAWAY: Pro-EU bailout party leading in the most recent Greek polls -> BoJ minutes show stimulus plan will not automatically increase with low inflation -> Week starts with a bounce for risk correlated currencies

Following a week of Greece led risk-off sentiment and the US dollar beating all major currencies except the Japanese yen, the start of the new trading week brought a boost for all currencies against the USD. The risk-on trading was spurred by Greek polls released on Saturday, they showed an improved position for the pro-EU bailout party New Democracy, thereby lessening fears of an upcoming Greek exit from the single currency.

New Democracy was placed strongest in all six polls published ahead of the elections, which are set to take place on June 17. The leading party’s head, Antonis Samaras, warned over the weekend of the toll a Greek exit would have on the country’s economy. The most popular of the anti-bailout parties, Syriza, dropped to second place in many of the polls which showed the party leading last week. However, New Democracy’s win against the anti-bailout parties in the previous elections was insufficient, as it still did not have enough seats to form a government.

In other economic news, minutes released from the Bank of Japan’s April 27 meeting showed that the bank isn’t implementing an automatic stimulus plan to maintain its 1% inflation target. Despite raising its asset purchase plan for the second time in two months during April’s meeting, the members said they expect the economic recovery to push inflation to the 1% target on its own. Although Japanese stocks slid on the release of the BoJ minutes, as of 07:15 GMT Nikkei is up for the day like the rest of the Asian and Australian indexes.

Today’s trading should be light as the US stock market is closed for Memorial Day and the only significant data coming out of Europe is Italian business confidence, projected to come in at a lower 88.6.

EUR/USD led today’s early rally of risk-correlated assets with a bounce back towards 1.2600 following last week’s drop to a two-year low at 1.2495. The 1.2586 low from August 2010 could be seen as a current support line. USD/JPY also dropped following this morning’s BoJ release. The pair has been consolidating above a 3-month low at 78.97 set on May 18.