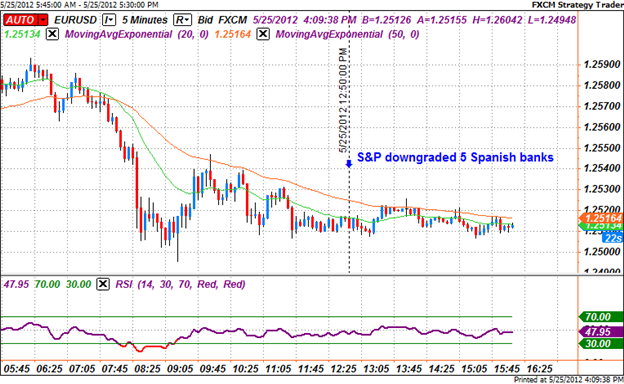 THE TAKEAWAY: S&P downgraded 5 Spanish banks to Junk and lowered economic risk score on Spain > the Downgrade Bolstered Uncertainty in the Eurozone that Forced ECB to Further Loosen its Monetary Policy> Reactions on Euro Fairly Muted

Standard & Poor’s Ratings Services announced today that it has revised down its economic risk score on Spain and lowered ratings on five financial institutions following its two-notch downgrade of the Kingdom of Spain (BBB+/Negative/A-2) on April 26, 2012.

Standard & Poor’s maintained its Banking Industry Country Risk Assessment (BICRA) on Spain in group “5” but lowered the economic risk score, a component of BICRA, to “6” from “5” and changed its assessment on Spain’s economic imbalances to “very high risk” from “high risk”.

The agency also revised down its assessment of the stand-alone credit profiles (SACPs) of six financial institutions, with revisions raging from one to three notches. With the exceptions of two financial institutions, all ratings either carry a negative outlook or remain on CreditWatch negative. They generally reflect the possibility that the S&P could cut the ratings further in the context of increasing pressure on the bank’s financial strength when Spain economic conditions weaken.

One of five banks downgraded today by S&P, Bankia, asked Spanish government late Friday for 19 billion euros (roughly $23.8 billions) in rescue funds to “reinforce the solvency, liquidity and solidity of the bank”. The troubled bank was partially nationalized by Spanish government earlier this month after a top-level turmoil. Yet, the cost of rescuing banks could overwhelm government finances and the Spanish government might eventually seek for international rescue package, like the ones Greece, Ireland and Portugal did. Combined with escalating concerns about Greek Euro exit, the growing instability in Spanish banking sectors bolsters uncertainty within the euro zone. This is likely to put pressure on the ECB to further loosen its monetary policy in the coming weeks.

Market participants showed fairly muted reaction regarding to the euro following Standard & Poor’s announcement on Spanish bank downgrades. As can be seen from the 5-minute EURUSD chart above, the currency pair trades within a narrow range between 1.2510 and 1.2520 as the downgrade was anticipated and the market has already priced in the move. Last Thursday, Moody’s rating agency also downgraded 16 Spanish banks in the latest sign of distress in Europe and mounting loan losses. At the time this report was written, the single currency traded at $1.2516 after touching the 22-month low of 1.2495 this early morning.