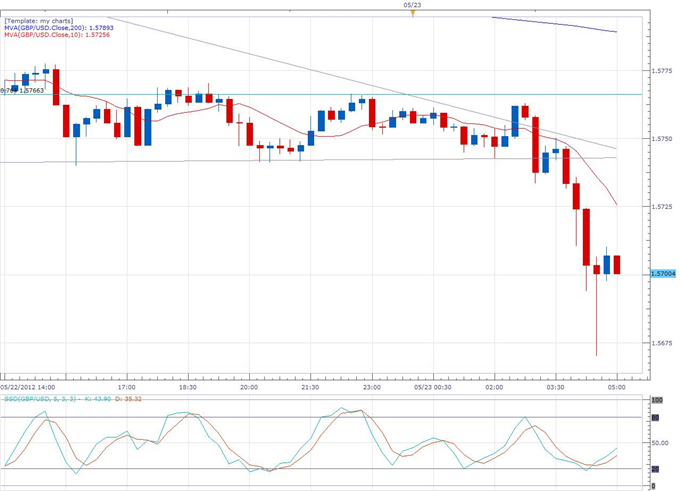 8 out of 9 Bank of England members voted against raising quantitative easing, keeping the bond-purchase program at 325 billion pounds, according to the minutes from their May 9-10 meeting. For the second month in a row, David Miles was the only member of the Monetary Policy Committee who voted for a 25 billion increase of the asset purchase program.

‘Further monetary stimulus could be added if the outlook warranted it,’ read the minutes from the meeting. The minutes also mentioned that economic growth will be weak in the long term, following the previous quarter’s onset of a double dip recession, and the euro-debt crisis remains a threat to the UK.

However, the Bank of England also said that consumer price index outlook doesn’t call for further QE, as inflation is projected to slow to the target 2.0% rate by 2013. Yesterday’s UK CPI rate came in slightly lower than expected, further supporting the lower inflation target.

Also reported this morning were UK retail sales, which fell the most in two years during April. Retail sales dropped an unexpected 2.3% from March, versus a revised 2.0% growth during the previous month. The drop in demand was attributed to rainfall that curbed clothing and fuel sales according to the Office for National Statistics.

The drop in sales comes as another sign of a slowing economy in the UK, and that combined with the lower than expected inflation supports those who hope to see further stimulus.

The expectation for further stimulus has a mixed effect on the sterling. Further QE would lower interest rates, which is usually currency-negative. However, if the stimulus is seen as effectively boosting growth, it could be considered currency positive.

Cable fell to 1.57000 in the hour before the release of the BoE minutes and the retail sales, and then briefly continued its drop following the news before retreating to the 1.5700 level. The next major support comes in at 1.5600.