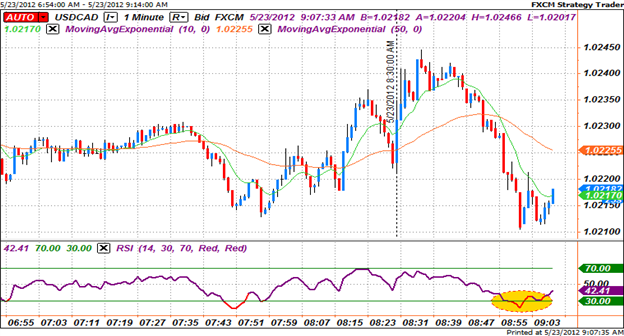 Sales in retail stores rose 0.4 percent to a seasonally adjusted C$39.05 billion in March, Ottawa-based Statistics Canada reported today. The print was higher than economist’s projection of 0.3 percent gain, according to Bloomberg News survey. The less volatile figure, excluding auto sector, modestly edged up 0.1 percent in Marchcompared to 0.5 percent increase widely predicted.Meanwhile, December’s reading was revised downwardly to a gain of 0.4 percent from a surge of 0.5 percent initially reported.

Regarding to region, retail sales climbed in four of thirteen major provinces in March. Most of gains were concentrated in Ontario (+1.2%) due to warmer than usual weather. On the contrary, News Brunswick registered the biggest decline of 1.5 percent.

Another report issued by Statistics Canada at the same time showed that the Canada’s composite leading indicators rose for the tenth straight month in April on substantial improvement in housing sectors. The index surged 0.3 percent last month, matching with consensus forecast from Bloomberg Survey. Meanwhile, March reading was downwardy revised to a gain of 0.3 percent from an advance of 0.4 percent initially estimated.

The composite leading indicator comprised of ten components which significantly affect cyclical activity in the economy and together represent major categories of Gross Domestic Product. Seven of ten components registered gains in April compared to eight in the previous month.

Housing index advanced 3.5 percent, mainly contributed to the gain in April leading indicators. The financial components remained positive, as did employment in services. In contrast, manufacturing components deteriorated. New orders fell for the second month in the row (-1.2%) while the ratio of shipments and inventories have flatted.

The Canadian dollar was traded mixed ahead North American session today as the loonie strengthens versus high-yielding currencies (Australian dollar, New Zealand dollar) but weakens versus safe-haven currencies (U.S. dollar, Japanese yen and Swiss franc). As can be seen from the 1-minute USDCAD chart above, the loonie immediately weakens 20 pips versus the greenback in the minutes following the retail sales and leading indicator reports. Nonetheless, the loonie quickly saw correction after ten minutes and edged 35 pips higher to $C1.021 per U.S. dollar.